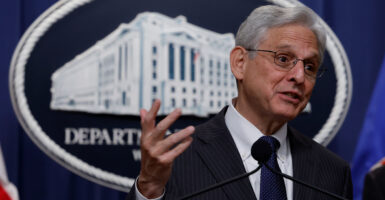 Attorney General Merrick Garland—seen here at a press conference on June 13—has failed to enforce a federal law that makes it illegal to protest outside the homes of Supreme Court justices. (Photo: Anna Moneymaker/Getty Images)

With U.S. Attorney General Merrick Garland and Fairfax County, Virginia, Commonwealth’s Attorney Steve Descano refusing to enforce federal and state laws against the pro-abortion protesters who are  intimidating and threatening Supreme Court justices and their families who live in Virginia, it’s time for Gov. Glenn Youngkin and state Attorney General Jason Miyares to step in and use their statutory power to arrest, prosecute, and seek the maximum penalty for every day the protesters are violating the law.

The lack of action by Garland and Descano is encouraging the “summer of rage,” leading not only to the arrest of an individual who wanted to assassinate Justice Brett Kavanaugh, but also attacks on pro-life charities and pregnancy resource centers.

The law on such misbehavior at the homes of justices is quite clear. Under 18 U.S.C. § 1507, it is a criminal violation of federal law to picket or parade “near a building or residence occupied or used by [a federal] judge, juror, witness, or court officer” with the “intent of interfering with, obstructing, or impeding the administration of justice, or with the intent of influencing any judge, juror, witness, or court officer, in the discharge of his duty.”

These threatening protesters are doing exactly that—trying to intimidate judges in an ongoing case.

Virginia law is also clear. Under § 18.2-419 of the Virginia Code, it’s a criminal offense to engage in protests “before or about the residence or dwelling place of any individual … which disrupts or threatens to disrupt any individual’s right to tranquility in his home,” and it’s a separate misdemeanor criminal violation for each day it occurs.

No one wants to restrict peaceful, civil protests in the public arena. But taking that to people’s homes, to their families, is an outrageous—and dangerous—abuse that should be stopped, or no one will want to serve in public office.

While federal agents and Fairfax County police have been present in the neighborhoods of the justices who live in Virginia, they have done absolutely nothing to enforce federal or state law due to the apparent directive from Garland and Descano that they have no intention of prosecuting anyone for violating either law.

Both Youngkin and Miyares, to their credit, have spoken out about this and criticized Garland and Descano for their reckless and dangerous dereliction of duty.

But it’s time for more than talk.

Prosecutions are normally handled by local county district attorneys in Virginia like Descano, and county police take their instructions from that DA. And because prosecutors like Descano are elected and not appointed, neither Youngkin nor Miyares have the ability to order Descano to do what he should be doing; namely, arresting these criminals and enforcing the law.

However, under Virginia Code § 52.8, “The Superintendent of State Police, his several assistants, and police officers appointed by him are vested with the powers of a sheriff for the purpose of enforcing all the criminal laws of this Commonwealth.”

Thus, the governor does have the ability to order the superintendent of the Virginia State Police to enforce the state law that makes such protests a criminal offense and arrest those violating the law at the homes of justices, such as Amy Coney Barrett and Clarence Thomas.

Furthermore, Virginia Code § 52.81 directs the state Bureau of Criminal Investigation to “conduct an investigation into any matter referred to it by the Governor.”

Virginia’s state attorney general does not have the general power to prosecute cases except in certain specified cases involving issues such as violations of state election laws or the state’s Alcoholic Beverage Control Act.  However, he can also prosecute criminal cases when “specifically requested by the Governor to do so” under §2.2-511 of Virginia law.

Taken together, all of this means that Youngkin has the power and authority to direct the state police to investigate and arrest the individuals invading the neighborhoods of justices in violation of the state’s criminal law. And Youngkin has the power and authority to then direct Miyares to prosecute those cases in the face of the local prosecutor refusing to abide by his oath of office and enforce the law.

The time has come for them to act to protect the justices, their families and neighbors, and very importantly, the ability of our judicial system to function objectively, without threats, intimidation, and violence.