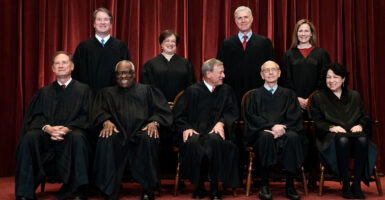 “The state will take your money, but won’t allow you to use it as you know best,” Amy Carson said, in a stinging rebuke of her home state of Maine last year when legal scholars from the Institute for Justice and First Liberty Institute appealed her case to the U.S. Supreme Court.

On Tuesday, in Carson v. Makin, the high court ruled 6-3, in an opinion written by Chief Justice John Roberts, that the state of Maine could not prevent David and Amy Carson, Troy and Angela Nelson, and other similarly situated families from using otherwise generally available tuition assistance benefits at religious (or “sectarian”) schools simply because those schools provided religious instruction.

The Carsons and Nelsons had challenged Maine’s decision to discriminate against religious schools as part of the state’s system of providing tuition assistance to families who lived in areas not served by a public school.

Maine does not operate assigned public schools in every town, particularly in rural far northern Maine, but students must still attend K-12 schools.

Because of that, state officials have allowed families and children to choose private schools outside of their local area using tuition assistance from the state. For many years, religious private schools were included among those educational options for families.

But in 1981, the state enacted a new requirement: Any school receiving tuition assistance payments must be “nonsectarian,” having no “religious practice” involved. A school could be named after a patron saint of the Catholic Church, for example, but teachers could not celebrate those ideas or even add value-laden concepts into the school curriculum.

Students in Jewish day schools, evangelical Christian schools, and other religious schools were affected, too.

At the time of the requirement’s adoption, the Maine Legislature even debated how it could enforce such a distinction between a school’s religious status and the institution’s “use” of religion in its curriculum.

A shady episode of political maneuvering ensued, as the Pioneer Institute’s amicus curiae brief explained, with lawmakers ultimately choosing to try to separate schools that were religious in name only from schools that practiced religion.

The Carsons and Nelsons argued that the state program’s “nonsectarian” requirement violated the Constitution by discriminating against religion.

Because the Supreme Court had decided other cases involving similar questions in recent years, including Trinity Lutheran Church of Columbia v. Comer (2017) and Espinoza v. Montana Department of Revenue (2020), the majority relied on the principles established in those cases to perform a straightforward resolution of this case.

In Trinity Lutheran, the court considered a Missouri program that gave grants to nonprofit organizations that installed cushioning playground surfaces, but denied those grants to any organization that was controlled by a church or religious entity.

The court held that the free exercise clause prevented Missouri from expressly discriminating against otherwise eligible recipients of public benefits because of their religious character.

And in Espinoza, the court held that a provision of the Montana Constitution that barred any aid to a school “controlled in whole or in part by any church, sect, or denomination” violated the free exercise clause as well, by prohibiting families from using otherwise available scholarship funds at religious schools.

When private individuals use taxpayer funding to choose a religious K-12 school for their children, those individuals are not using public money to establish a religion.

The Supreme Court noted that the state’s interest in not establishing religion and maintaining government neutrality on religion doesn’t justify cutting out parents who want to exercise their religious beliefs by sending their children to schools that provide religious instruction.

Maine chose to operate a tuition assistance program, but explicitly left religious schools out of the program. On Tuesday, the court made it abundantly clear that picking and choosing who receives public benefits that are otherwise available to all, based on whether they are religious or want to use that benefit in a religious way, offends the First Amendment.

Now the Supreme Court has put the “status versus use” distinction to rest and simultaneously ruled that your beliefs and values matter.

He went on to say, “The State pays tuition for certain students at private schools—so long as the schools are not religious. That is discrimination against religion.”

For the Carsons and the Nelsons, what they think is the best educational option for their children will stand. That brings hope to millions of families of school-aged children around the country who want their beliefs to stand, too.