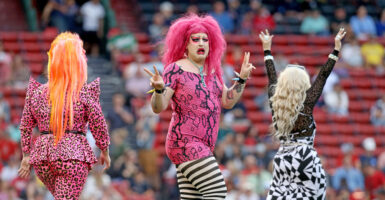 Drag queens walk out onto the field during a celebration of Pride Day at Fenway Park, home of baseball's Red Sox, on June 15 in Boston. Drag queens are showing up in growing numbers in schools as well. (Photo: Matt Stone/MediaNews Group/Boston Herald/Getty Images)

For today’s left, it seems that, politically, “A drag queen for every school” has replaced “a chicken in every pot.”

Here’s what Michigan’s Democratic attorney general, Dana Nessel, who is gay, had to say about the trend of bringing drag queen events to schools.

“Drag queens make everything better. Drag queens are fun,” Nessel said, according to a Detroit News reporter on Twitter.

“A drag queen for every school,” she added.

In that vein, America’s children are being hit by a tidal wave of transgender and gender-identity propaganda in popular media, and perhaps more disturbingly, in our schools.

In early June, videos surfaced from an LGBTQ Pride event at a gay bar in Dallas called “Drag Your Kids to Pride.”

It was, to say the least, highly inappropriate for children.

What happened in Dallas wasn’t an isolated incident. It appears that taking young children to drag shows, where cross-dressing, sexualized adults perform and may occasionally expose themselves is becoming all the rage as similar events have occurred around the country.

They are often labeled “family friendly,” seemingly stripping the phrase of all meaning.

The problem, unfortunately, goes much deeper than the growing number of such events. In the past few years, there has been an explosion of K-12 schools promoting the most extreme elements of the LGBTQ agenda, including partnering with pro-drag organizations.

The New York Post reported that New York and New York City spent more than $200,000 on drag shows at schools.

Money was funneled to the program through New York state’s Council on the Arts and departments of Education, Cultural Affairs, Youth and Community Development, and Transportation.

According to The New York Post, parents were either told their children would be attending these events—with no option to opt out—or they weren’t notified at all.

This is, without a doubt, part of a broader effort to normalize transgenderism and gender fluidity for young children.

As with critical race theory, some on the left try to dismiss claims that foisting gender-identity ideology on children is a widespread phenomenon or that it’s just being done to promote tolerance. If children are occasionally exposed to something inappropriate, it’s just an unfortunate part of that process, the reasoning goes.

“I agree that Pride should be a welcoming space for children and teens, but policing how others show up doesn’t protect or uplift young people,” wrote Lauren Rowello in a June 2021  opinion piece for The Washington Post. “Instead, homogenizing self-expression at Pride will do more harm to our children than good. When my own children caught glimpses of kink culture, they got to see that the queer community encompasses so many more nontraditional ways of being, living, and loving.”

In Rowello’s view, wanting to shield children as young as toddlers from “kink” is dismissed as bigotry.

This cultural blitz is clearly having an effect.

A recent study conducted by the pro-LGBTQ Williams Institute at the University of California at Los Angeles found that the number of young people who identify as transgender has doubled in just a few years. One-fifth of the transgender population is aged 13 to 17, according to the study.

It’s also significant that the study found the biggest increases are happening in blue states that are more likely to promote pro-transgender and gender-identity advocacy in their public school curriculums.

It’s no surprise, given the aggressive school advocacy, that New York ranked at the very top of the list for numbers of transgender youth.

This transformation is being foisted on our society by big institutions—such as Big Tech—that squash debate and censor inconvenient dissenters, by public schools that have been co-opted on the transgender movement’s behalf, and even by the federal government. The Biden administration is poised to expand Title IX laws against sex discrimination to include gender-identity discrimination and is threatening to even take school lunch funding away from schools that don’t comply.

Notice how quickly the left drops concern for the poor and needy when they get in the way of the social revolution?

What we are seeing is every big institution, buttressed by the relentless ideological support of higher education, falling in line to support the left-wing gender-ideology agenda.

Now, our K-12 schools are all in on it, too, dragging kids to drag and a whole lot more.