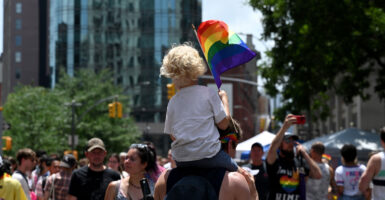 The Smithsonian American Art Museum hosted a “Pride Family Day” event over the weekend, featuring what it called an “age appropriate” drag queen show and crafts inspired by the LGBTQ Pride flag for children ages 3 and up.

But critics countered that “there is no case” in which such performances “are ‘age appropriate’ for kids,” and condemned the event for being “sponsored by a public institution supported with our tax dollars.”

The event Saturday encouraged families with young children to march outside the art museum in Washington with D.C.’s Different Drummers, a band made up of LGBTQ musicians; to “enjoy a dance party” hosted by an LGBTQ+ advocate and DJ; and to observe a “lip-sync drag show” hosted by four drag queens labeled “some of D.C.’s best performers.”

Jay Richards, director of The Heritage Foundation’s DeVos Center for Life, Religion, and Family, told The Daily Signal, “It is absurd to refer to a drag queen show as ‘age appropriate’ for 3- to 5-year-olds.”

A drag queen, by definition, is a man dressed up in an extreme and hypersexualized stereotype of a woman. It’s hard to imagine what parents would want to expose their children to men painted in “woman-face.” And to add insult to injury, this is sponsored by a public institution supported with our tax dollars.

The taxpayer-funded Smithsonian event is just the latest attempt to infect young minds with harmful gender ideology. Despite the event’s advertisement, there is no case in which adult performers are ‘age appropriate’ for kids. Now more than ever, we need … amendments to stop federal dollars from promoting harmful ideology in any of its forms.

The Daily Signal is the news outlet of The Heritage Foundation.

The controversial event came amid the Smithsonian’s larger efforts to celebrate Pride Month, seen through its National Museum of American History’s “Illegal to Be You: Gay History Behind Stonewall” exhibit that was on display from June 2019 through July 2021 and a wide array of LGBTQ stories on the art museum’s blog.

The Smithsonian American Art Museum, which has hosted a Pride Month drag queen story time online for the past two years, did not respond to a request for comment.