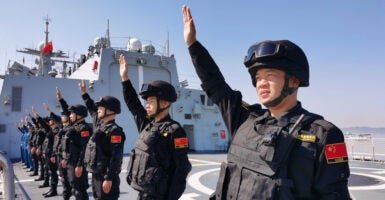 While the U.S. Navy debates how many ships to decommission out of budget concerns, China's navy is increasingly flexing its muscle around the world. Pictured: Special operation soldiers of the Chinese naval fleet wave farewell on the deck at a port in Zhoushan on April 28, 2020, as the 35th fleet of the Chinese People's Liberation Army Navy leaves for the Gulf of Aden. (Photo: Jiang Shan/Xinhua/Getty)

In recent comments on the defense budget, Rep. Rob Wittman, R-Va., rightly declared the standard for determining an appropriate level of defense funding should be the ability to adequately deter China.

Unfortunately, too many statesmen have underestimated China’s intentions to supplant the U.S. and current rules-based order, while political leadership has preferred to defer tough budget choices to a comfortable future.

Congress is currently conducting its traditional review and adjustment of the president’s budget submission, making so-called markups—or changes and additions. Given the dangers confronting the nation, Congress thankfully is again likely to set aside the president’s inadequate defense budget and increase it in a number of areas.

The value of those added investments is not measured in dollars spent, but in delivery of military capabilities that deter Chinese adventurism. Moreover, the competition with China has so narrowed that there’s no room for waste, and the Defense Department must be a better steward of the nation’s treasure as it pursues new warships and weapons. There can be no repeat of the failed littoral combat ship.

While helpful, such tweaks will not be enough to deter China. American statecraft—actions in pursuit of national interests—has been failing for too long while the military backstop to those failures has been severely weakened after decades of mismanagement and underresourcing.

To be clear, American statecraft has been failing for some time, predating Russia’s invasion of Ukraine and the Afghanistan evacuation debacle. At its core, American statecraft has muddled through crises and ceded ground since Russia’s 2008 invasion of Georgia and the outwitting of U.S. diplomats over the 2012 Scarborough Shoal standoff, giving China possession of the Philippines’ strategic shoal.

It’s born from a failure to confront the changed security and economic dynamics underlying our competitors’ newfound confidence.

This confidence is not without merit. China has diligently worked to sanction-proof itself while building a world-class military. Since 2013, it has expanded economic and security networks by seeding developing countries with hundreds of billions of dollars in infrastructure investments through the Belt and Road Initiative.

China oftentimes uses “debt diplomacy”—financing projects it knows countries can’t afford, to tie them to Beijing and secure favorable policies or ports as it did in Sri Lanka. And its list of overseas bases is growing: Cambodia, Djibouti, soon the Solomon Islands, and potentially Equatorial Guinea.

Following the West’s 2014 sanctions against Russia for its annexation of Crimea, China developed alternatives to the SWIFT financial system, enabling transactions with Russia outside of prying Western eyes. Then in 2015, as China completed a rapid militarization and fortification of man-made island garrisons in contested parts of the South China Sea, it faced no meaningful reprisal or economic consequence.

While Russia may be facing near-term setbacks as its war in Ukraine bogs down, China’s confidence is raging. China is committing increasingly aggressive acts, like two recent incidents in international airspace.

That happened after a year of heightened tempo of Chinese naval and air operations around Taiwan, actions suggesting China is increasingly confident in its ability to set the diplomatic conditions for a showdown and win a confrontation with the West over Taiwan.

Returning to the markups of the defense budget, specifically by the House seapower and projection forces subcommittee, rather than decommission 24 warships, the subcommittee recommended saving five. The Senate recently made its markups and would save half of the ships the president wants to retire. Either way, the Navy loses 12 or more ships in 2023, while it’s buying only eight, which with lengthy production schedules could take five years before the Navy sees them.

Michael Gilday, the chief of naval operations, the senior uniformed leader of the Navy, has attempted to advance the idea that a larger fleet is too expensive and beyond the Navy’s ability to recruit and retain capacity to crew. In Gilday’s view, he’s forced to cut ships to ensure that what remains can be manned and sustained within budgets provided, despite a growing and menacing Chinese fleet.

Sadly, the bottom line is that too many ships are reaching the end of their lives or being retired with years of life left. Accepting this situation in the face of an emboldened China is irresponsible and defeatist, and invites Chinese military adventurism.

Should Chinese bombs rain down on Taiwan as Russia’s did on Ukraine, it would be folly to assume the island would capitulate—rather, many people there would resist. It will be a fight Americans won’t sanction sitting out, either. The island is a fellow democracy, important trade partner, and home to thousands of U.S. citizens. Large-scale American casualties due to Chinese bombardment would enrage the people here to action.

If this were to occur without the U.S. having the means of waging war or sustaining its economy under Chinese assault, the U.S. would have to build a merchant fleet in conflict. Already the U.S. dependence on foreign shipping raises serious questions as to its ability to sustain a wartime economy.

Foreign ships called on U.S. ports more than 70,000 times in 2018, and today China controls globally 40% of commercial shipbuilding and by ownership 17% of the world’s commercial fleet. While some allies, notably Japan and Greece, with large commercial fleets could be expected to support wartime trade, the fact is that only 182 U.S. flagged ships could be relied on in wartime to feed, fuel, and sustain the nation. That’s an impossible feat.

Fresh thinking is needed, and responsibly repealing the century-old Jones Act could lead this strategic sector to global competitiveness. To date, the Jones Act has not ensured the U.S. military has the shipping needed while distorting the domestic shipping market to be prohibitively expensive.

A change would do the nation, shipbuilders, and shipping sectors good by focusing on being globally competitive while increasing the number of American-owned and flagged vessels available in a potential conflict.

The day is fast approaching when China—not the U.S.—will be doing the sanctioning and blockading. A China not reliant on U.S. or allied imports, free of Western financial constraints, and controlling the ships of trade can hold the U.S. hostage. Should China flex this advantage, Americans might be compelled to pursue policies anathema to our democratic sensibilities.

When the nation similarly confronted a rapidly degrading security environment in 1930s Europe and the Pacific, then, as today, the Navy was too weak. So, Congress began a program to rebuild it with legislation like the Navy Act of 1938 to grow the fleet by 20% and the Naval Expansion Act of 1940. It was expensive and unpopular, but wholly needed to set the stage for America’s 1945 victory in the Pacific.

The nation is at a similar decision point again. We must wisely invest now to begin building the warships, commercial shipping, and shipyards that will fight for and sustain the nation in a war that could be upon us this decade.