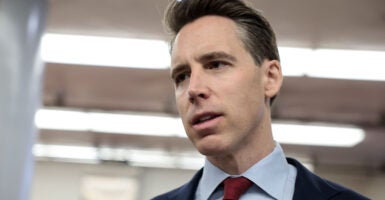 “Laura, this is the most recent example of the most anti-First Amendment administration in American history,” Hawley told host Laura Ingraham of “The Ingraham Angle.” The Missouri senator responded to a clip Ingraham played of White House National Climate Adviser Gina McCarthy calling on tech companies to censor debate over environmental issues during an Axios event Thursday.

“The challenge is that now we’re moving from denial to actually just trying to disengage the public.,” McCarthy said. “We have to get tired, we have to get better at communicating, and frankly, the tech companies have to stop allowing specific individuals over and over again to spread disinformation.”

YouTube announced in 2021 that videos that didn’t align with “well-established scientific consensus around the existence and causes of climate change” would not be monetized. Twitter and Facebook also took steps to combat so-called “misinformation” on environmental issues.

“This is an administration assaulting our basic fundamental constitutional values and principles at every single turn,” Hawley said. “I can’t think of another administration in our history that has assembled an enemies list if you will and read it over and over from the White House podium and says, ‘We want these people off of social media, we want these people not to be able to communicate a message.’”

Hawley listed vaccines to combat COVID-19, mask mandates and environmental issues as topics in which the Biden administration has reportedly suppressed debate.

The White House and Hawley did not immediately respond to requests for comment from The Daily Caller News Foundation.