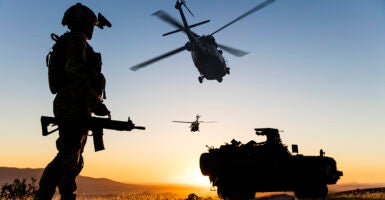 June 14 is the 247th birthday of the U.S. Army, an institution that existed even before the nation itself. In 247 years, it has been in 190 military campaigns and countless noncombat operations such as disaster relief. (Photo: Guvendemir/Getty Images)

Tuesday marks the 247th birthday of the U.S. Army, an institution that existed even before the nation it supports.

The Revolutionary War began in April 1775 in Massachusetts as small skirmishes between militiamen and British regulars. When the Second Continental Congress later convened in Philadelphia in May that year, the delegates soon realized that war was upon them and that it was going to take more than militia to win independence.

Six companies of expert riflemen, be immediately raised in Pennsylvania, two in Maryland, and two in Virginia … [and] as soon as completed, shall march and join the army near Boston, to be there employed as light infantry, under the command of the chief Officer in that army.

In addition to reinforcing the defenses around Boston, Congress’ order also brought into existence America’s Army.

In the intervening 247 years, the Army has been involved in most of the defining moments of American history: the Revolution, the Civil War, two world wars, other conflicts, school integration, restoring order during riots, the integration of the armed forces, the construction of the Panama Canal, and supporting citizens harmed by natural disasters such as Hurricane Katrina.

If you ever see the official Army flag, you will notice it is festooned with streamers—190 of them to be exact. Each of these colored ribbons denotes the Army’s participation in a military campaign.

It’s worth noting there are no streamers for noncombat Army operations such as those conducted in support of Operation Warp Speed, where Army officers were responsible for much of the nation’s work to produce and deliver the COVID-19 vaccine. Other Army operations during the pandemic set up and ran hospitals in cities like New York or ran COVID-19 testing stations.

For the military campaigns depicted on the streamers, some of them are contemporary, like the “Liberation of Afghanistan” streamer that connotes the 2001 campaign where America pursued the terrorists and those who supported them in the attack on Sept. 11, 2001.

Others are more obscure and known only to military historians, such as the Aleutian Islands campaign of 1942-1943 conducted to eject the Japanese from the islands of Attu and Kiska, or the Chippewa campaign of 1814, wherein Army forces sought to rid Lake Ontario of the British during the War of 1812.

What all the streamers and campaigns have in common is that they symbolize the Army’s commitment to defend and protect U.S. interests no matter the cost. These colored pieces of cloth represent the willingness of the Army to bravely and faithfully do what the nation asks.

On its 247th birthday, the Army is facing significant challenges attracting volunteers to join its ranks. The tight labor market coupled with rising numbers of Americans who cannot medically qualify for military service is causing recruiting shortfalls.

In addition to that, shortfalls in civic education, declining numbers of veterans in society, and a general skepticism of American institutions are also causing a reduction in the number of youths expressing a desire to serve.

The Army offers great opportunities for youth to learn leadership, service, and discipline and needs the support of the American people to continue to defend and preserve all that we hold so dear. Each of us can play a role in influencing young people to consider such a vital and honorable way to serve their nation.

The Army has a proud history of dedication to our country and its ideals. As signified by the 190 streamers surrounding its flag, it has protected and served the republic during its toughest times. The patriots serving in its ranks today around the globe deserve our thanks, and this is an appropriate day to offer just that.