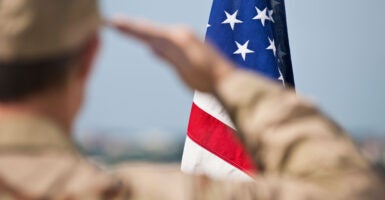 America’s armed forces depend on a steady stream of volunteers, willing to raise their right hand and swear an oath to defend the Constitution “against all enemies, foreign and domestic.” (Photo: Tetra Images/Getty Images)

America’s security depends largely on the readiness of the U.S. military.

Threats loom like a rising China, terrorism, and bad actors like North Korea, Iran, and others. These countries have demonstrated a desire to remake the existing world order to better suit their ideologies and interests.

To remain ready, America’s armed forces depend on a steady stream of volunteers, willing to raise their right hand and swear an oath to defend the Constitution “against all enemies, foreign and domestic.”

More than 165,000 volunteers were needed in 2019 to meet the Pentagon’s recruiting goals. You would think in a country with a population of some 328 million people, of which approximately 30 million are ages 18 to 24 years, that it would be relatively easy to find 165,000 per year willing to serve.

If you thought that, you would be wrong.

The armed forces, especially the Army, have been struggling of late to meet their numbers goal. In fiscal year 2020, the Army set a goal for itself to recruit more than 65,000. At the end of the fiscal year, it had only been able to recruit 62,150, coming up short by nearly 3,000.

“Sure,” you could say, “COVID-19 caused this.” Maybe. Certainly, COVID-19 has had global effects. On the other hand, COVID-19 also caused high unemployment, which has historically been associated with an easier recruiting environment. Only two years ago, in 2018, the Army also fell short of its goal, then by 6,500.

So, what’s going on? Why is this so hard? Given the benefits of military service, including free tuition for college, qualification for veteran’s loans, free health care, as well as the intrinsic satisfaction of serving your country and learning teamwork and leadership, you would think more would be interested.

A number of factors play into making recruiting more difficult.

More and more young Americans are immediately going to college following high school, slimming the available pool. The number of military veterans among the U.S. population is going down every year, and to a great extent, exposure to veterans helps encourage young people to volunteer.

Also, knowledge of civics among youths is declining, with 25% of eighth graders in 2018 testing proficient in civics. All this results in a very low number of young people interested in military service.

When youth ages 16 to 21 were asked the question “How likely is it that you will be serving in the military?” only 13% answered either definitely or probably.

If that weren’t enough, only 29% of today’s youth qualify to join the military.  The leading reason for disqualification is obesity, closely following by disqualifying medical conditions, crime records, or lack of a high school education.

Some advocate for a return to conscription or the draft to solve that problem. Trust me, you don’t want that. Forcing Americans to serve against their will has never been our country’s tradition, and would result in a military of much lower quality and competence.

It’s a tough problem, but there are some ways we can all help.

Influencers, like parents and grandparents, are extremely important in helping our youth choose a path. Right now, only 46% of influencers are likely to recommend military service to a youth.

You are probably an influencer—or will be one—and you can help the military by encouraging service.

Many U.S. high schools, 3,390 to be exact, have a Junior Reserve Officers’ Training Program. But many do not. These programs help young people acquire talents like leadership, civic knowledge, and discipline.

If your high school doesn’t have a program, ask how it can get one.

If they are not getting the access, ask tough questions of your school officials and boards.

Think of ways your community can recognize military service. When my son graduated from Waynesville High School in Missouri, the announcer made a big deal of mentioning that he was directly entering college ROTC. He got a big round of applause, and it was impactful.

Holidays like the Fourth of July, Veterans Day, and other ceremonies present similar opportunities.

To combat the problem of youth obesity and poor physical fitness, the public should support local sports programs and encourage physical activity of all forms, and advocate better nutrition.

Finally, we need our national leaders to never miss an opportunity to describe the virtue of serving our country.

This isn’t going to be a quick fix, but together, we can make a difference. And we must. Our security depends on it.