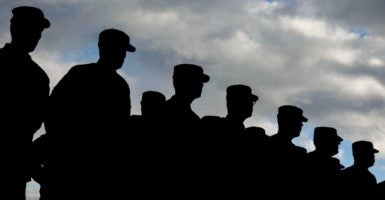 The Trump administration has proposed increasing Army active end strength from its current level of 476,000 to about 540,000 within the next few years. (Photo: Nicolas Armer/dpa/picture-alliance/Newscom)

Wesley Dearen is a member of The Young Leaders Program at The Heritage Foundation.

The United States today faces a rising number of threats to national security from around the world, whether it be from North Korea, ISIS, or Russia.

To deter and counter these threats requires a strong ground combat force, and it is the shared responsibility of the executive branch and Congress to adequately resource that force.

The Heritage Foundation’s 2017 Index of Military Strength notes, “The U.S. Army is America’s primary land warfare component” whose “chief value to the nation is its ability to defeat and destroy enemy land forces in battle.”

Many people hope that the recent wars in Iraq and Afghanistan will be the last such major engagements requiring a ground force exceeding 100,000 and that the Army will not need to be as large in the future.

However, as former Secretary of Defense Robert Gates has noted,

In the 40 years since Vietnam, we have a perfect record in predicting where we will use military force next: We’ve never once gotten it right. If you think about it from … Iraq twice to Afghanistan … and so on—in not one of those cases did we have any hint six months ahead of the start of hostilities that we were going to have military forces in those places.

Coming at the question from a different angle, Marxist revolutionary Leon Trotsky famously stated that “you may not be interested in war, but war is interested in you,” suggesting that we often don’t have the luxury of choice when faced with a war.

A broad array of military experts agree that the U.S. Army is too small. Retired Army Gen. Barry McCaffrey has argued that it is “grossly undermanned.”

He also said that in spite of a growing recognition that Russia is a strategic threat, the U.S. still has “inadequate ground combat power in Europe.”

Since the end of the Cold War, the Army has been disestablishing permanent bases and reducing personnel levels across Europe. This downsizing trend will make rebuilding a presence there much more difficult.

Some argue that downsizing can be offset by advances in military technology. This trade-off between capacity and capability has been made in other military services

But Dan Gouré of the Lexington Institute argues that such a trade-off in Europe would be “disastrous for both [the Army] and national security.”

According to Gouré, the Army shouldn’t decrease troop levels in order to pay for future high-tech weapons systems, as both sufficient capacity and modernization are critical to sustaining combat readiness into the future.

The Army is currently authorized to have 476,000 active-duty soldiers for fiscal year 2017. Army Chief of Staff Gen. Mark Milley said his service is operating at a level of “high military risk” due to this inadequate number of troops.

The Obama administration planned for the Army to draw down to a combined active-duty and guard/reserve end strength of 980,000 troops in fiscal year 2017. Milley had argued that this force would have to be “stretched to execute … the global commitments” of the U.S. military. This drawdown has been stymied recently by the combined efforts of Congress and the new White House.

In order to continue to field a ground force capable of deterring or defeating today’s various threats, the Army needs to grow.

The Trump administration has proposed increasing Army active end strength from its current level of 476,000 to about 540,000 within the next few years. In the omnibus bill signed by President Donald Trump recently, 28,000 additional troops were funded in a revision of the fiscal year 2017 appropriation bill, which is a good step toward this needed personnel buildup.

This is buildup similar to The Heritage Foundation’s assessment of Army capacity needs, which found through historical analysis of major combat engagements that over 500,000 active-duty troops on average have to meet a requirement of 50 brigade combat teams.

While experts may disagree on specific numbers when discussing the Army’s appropriate size, few argue that it is currently big enough. Due to arbitrary budgetary constraints in recent years, the Army’s capacity, readiness, and modernization have eroded.

Congress can uphold its responsibility to provide for the common defense in part by providing the resources necessary to begin rebuilding the size of the Army.