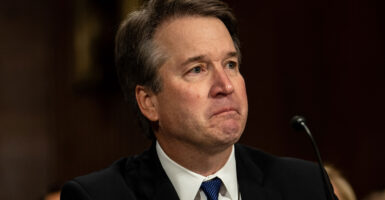 If someone attempts to murder a Supreme Court justice, but corporate media barely covers it, did it actually happen?

Sure, most outlets covered the news of the arrest of man who, in the early hours of Wednesday morning, arrived at Justice Brett Kavanaugh’s home, armed with a “tactical knife, a pistol with two magazines and ammunition, pepper spray, zip ties, a hammer, screwdriver, nail punch, crowbar, pistol light, [and] duct tape,” per the Justice Department.

But after reporting the basic facts—that the suspect’s name was John Nicholas Roske, that he had been deterred by the sight of two deputy marshals outside Kavanaugh’s home—America’s journalists didn’t seem to rush into any analysis.

Doubt me? Just consider how when then-Rep. Gabby Giffords, D-Ariz., was shot in 2011, former Alaska Gov. Sarah Palin was blamed for inciting violence with a map with a series of political targets—despite there being zero evidence tying Giffords’ shooter to Palin.

Yet in 2017, when a gunman shot five people at a Republican lawmakers’ practice baseball game in Alexandria, Virginia, there was little in the way of a national conversation.

It looks like 2017, not 2011, is the road map for what will happen in the aftermath of the attempted assassination of Kavanaugh, despite there being clear evidence Kavanaugh’s would-be shooter was motivated by politics. As noted in the criminal complaint, Roske told police “he was upset about the leak of a recent Supreme Court draft decision regarding the right to abortion as well as the recent school shooting in Uvalde, Texas.”

In light of Roske’s motivation, it seems relevant to remember the remarks of then-Senate Minority Leader Chuck Schumer in 2020 when, amid a discussion of abortion, he said in part, “I want to tell you, Kavanaugh, you have released the whirlwind and you will pay the price.” It seems just a smidgen pertinent that in May, then-White House press secretary Jen Psaki refused to condemn the protests outside of Supreme Court justices’ homes, which started after the leaked draft of a high court decision overturning Roe v. Wade.

And yeah, it seems, oh, the teeniest bit germane that the Women’s March (a favorite leftist protest) has called for a “summer of rage.”

But don’t hold your breath waiting to see these sound bites play nonstop on media.

Making the hypocrisy of the whole situation even more evident is tonight’s prime-time hearings on the Jan. 6 Capitol riot, which will likely focus on whether President Donald Trump’s remarks helped incite the riot. Not only are Democrats focusing on this, but three major broadcast networks (ABC, NBC, and CBS) are giving up their most valuable TV hours to cover this hearing.

So, let’s take a step back.

We right now have regular protests at Supreme Court justices’ homes. Here at The Daily Signal, we’ve covered protests in recent weeks at the homes of Chief Justice John Roberts and Justices Samuel Alito and Amy Coney Barrett, and of course, Kavanaugh. At Barrett’s home alone, there have been at least five protests, complete with people swearing and using profanities in front of neighborhood children.

Mind you, these justices don’t live in swanky communities, in opulent homes set far away from the street and surrounded by high, secure fences. No, Alito, Roberts, Barrett, and Kavanaugh live in regular neighborhoods, in typical suburban homes.

And yet, the response to this insane invasion of their privacy and security has been … crickets.

Sure, the justices have been given some additional security. But where is the outrage from top liberal lawmakers and activists? Where are the calls for people to remember that at the end of the day, no matter how vehemently we disagree on certain policies, we are all Americans who should be working together to resolve our differences?

Where is the outcry that basic human decency is being violated by this harassment and intimidation of our judges?

If people want to protest the Supreme Court (and as someone who has held Roe v. Wade was wrongly decided for decades, I get that sentiment), you are welcome to protest outside the Supreme Court. There is a public place available to make your views clear.

But going to homes is beyond the pale, and what’s more, it’s illegal. As my Heritage Foundation colleagues John Malcolm and Zack Smith wrote for The Daily Signal, a federal law states:

Whoever, with the intent of interfering with, obstructing, or impeding the administration of justice, or with the intent of influencing any judge … in the discharge of his duty, pickets or parades … in or near a building or residence occupied or used by such judge … shall be fined under this title or imprisoned not more than one year or both.

(The Daily SIgnal is the news outlet of The Heritage Foundation.)

Yet not a single protester has been arrested or charged. Attorney General Merrick Garland seems unconcerned, as do local prosecutors, about the fact that protesting at Supreme Court justices’ homes is becoming habitual.

And while Sen. Dick Durbin, D-Ill., the No. 2 Senate Democrat, called for protesters to “stay away from homes and families,” his admonition has been the exception, not the norm, among liberals.

On Wednesday night, fewer than 24 hours since Roske showed up at Kavanaugh’s home—with gun and knife and hammer and everything else in hand—protesters came to Kavanaugh’s home.

And of course, there were no arrests.

Nor did the group even seem to be concerned about the possibility that they might be asked to follow the law or face the consequences, instead blithely tweeting about their plans.

Do liberal elites want us to spiral into some kind of banana republic, where we have to keep our Supreme Court justices trapped in estates girded by federal security?

Kavanaugh doesn’t deserve this. Nor do Alito, Barrett, Roberts, or any of the other justices, or for that matter, their families.

Nor is it only justices who are affected. Pregnancy care centers across the nation have been vandalized, just for the sin of supporting women facing unexpected pregnancies. In Wisconsin, a Molotov cocktail was tossed into a center, and the words “if abortions aren’t safe then you aren’t either” ominously spray-painted on its walls. In Buffalo, New York, a pregnancy center was firebombed just this week.

Let’s have spirited debates. Let’s talk about whether an unborn child with her own unique DNA is a clump of cells or a person. Let’s discuss the right way to uphold the Second Amendment and keep our schools safe.

But we cannot have this.

Here’s the reality: Corporate media and liberal lawmakers probably aren’t going to rush to highlight the horrific assassination attempt on Kavanaugh. They know that moderates will be horrified to discover how commonplace it has become for Supreme Court justices to face protests at home. (Notice how little coverage the corporate media has given to these protests, despite the fact that they are publicly announced ahead of time.) And they don’t want to risk alienating the extremists on their own side by focusing on this.

So, forward we go, with the double standard firmly in place. That’s bad for America—and frankly, unjust to Kavanaugh, whose only crime has been to be true to the courage of his judicial convictions.