Schumer Threatens Gorsuch, Kavanaugh on Abortion Case: They ‘Will Pay the Price’ 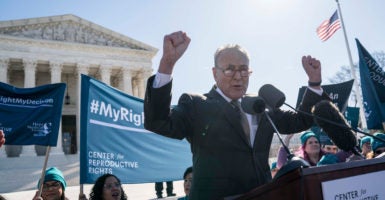 Editor’s update: Chief Justice John Roberts issued a statement Wednesday condemning Chuck Schumer’s remarks, saying: “Justices know that criticism comes with the territory, but threatening statements of this sort from the highest levels of government are not only inappropriate, they are dangerous.”

Senate Minority Leader Chuck Schumer warned two Supreme Court justices Wednesday that they “have released the whirlwind” and that they “will pay the price,” adding that they “won’t know what hit you” if they rule the wrong way.

Schumer spoke Wednesday at a rally in front of the United States Supreme Court where justices heard June Medical Services v. Russo, a case in which an abortion provider challenges a 2014 Louisiana state law that requires abortion providers to have admitting privileges in a hospital within 30 miles of the abortion facility.

Both pro-abortion and pro-life activists gathered Wednesday at the Washington, D.C. rally where the New York senator warned Justice Brett Kavanaugh and Justice Neil Gorsuch against taking away “fundamental rights” related to abortion.

“You won’t know what hit you if you go forward with these awful decisions,” he added.

The senator’s comments referenced the political price Republicans “will pay for putting them on the court” as well as “a warning that the justices will unleash major grassroots movement on the issue of reproductive rights against the decision,” Schumer spokesman Justin Goodman told The Daily Caller News Foundation.

“Let me ask you, my friends, are we going to let Republicans undo a woman’s right to choose?” Schumer asked the crowd. “Are we going to stay quiet as they try to turn back the clock? Are we going to give up or waver when things get tough?”

The pro-abortion activists in the crowd responded to each of these questions with a resounding “No.”

“The Democratic Party is so radicalized on abortion politics that today Chuck Schumer threatened Justice Gorsuch and Justice Kavanaugh if they didn’t strike down a simple, commonsense, pro-woman law that simply says that abortion doctors need to have admission privileges at a local hospital,” Sasse said in a statement provided to The Daily Caller News Foundation.

The Nebraska senator pointed out that if a Republican threatened Supreme Court Justices Sonia Sotomayor or Ruth Bader Ginsburg, “it would be the biggest story not just in Washington but all across America.”

“But, Chuck Schumer’s bully tactics aren’t getting much air time right now because there’s so many people in bed with his defense of abortion and his attack on an independent judiciary,” Sasse added. “These bullying tactics need to stop.”

He was accused of sexual assault by Christine Blasey Ford, whose lawyer Debra Katz said Ford’s accusations were motivated by putting “an asterisk next to” Kavanaugh’s name before “he takes a scalpel” to Roe v. Wade.

“In the aftermath of these hearings, I believe that Christine’s testimony brought about more good than the harm misogynist Republicans caused by allowing Kavanaugh on the court,” Katz says in a video exclusively obtained by The Daily Caller News Foundation in September 2019.