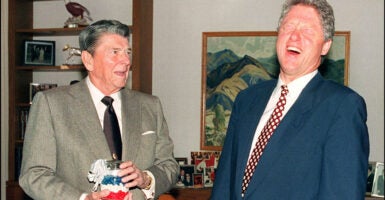 Longtime Democrat William Galston, deputy assistant to Bill Clinton for domestic policy, wrote a recent column for The Wall Street Journal on the performance of the economy during Bill Clinton’s eight years in office. According to Galston, virtually everything Clinton did was a hit.

“What about the poor?” Galston asks, and then exults: “The poverty rate declined during the Clinton administration by nearly one-quarter, from 15.1% to 11.3%, near its historic low. And it declined even faster among minorities.”

It is hard to argue with Galston’s statistics. When Hillary Clinton ran for the presidency in 2016, she vowed to put her husband in charge of the economy because Democrats and most Americans knew it was flourishing when he was in the White House. This columnist acknowledged the point in The Washington Times. But voters, I cautioned, “need to be constantly reminded” that the prosperity materialized because Bill Clinton capitulated to Republicans who had politically pressured him into accepting policies that drove Ronald Reagan’s successful presidency.

Clinton’s first two years in office, Galston fails to tell his readers, ended in an electoral disaster for the Democrats. Determined to go on a high-tax, big-spend binge after winning the Oval Office in 1992, Clinton narrowly won a major income tax increase in the Democratic-controlled Congress. But congressional Republicans blocked his other important initiatives, including a big-spending “stimulus” program, a major energy tax, and Hillary Clinton’s national health care plan.

When 1994 rolled around and with Newt Gingrich leading the Republican off-year election charge from the House with his Reaganized “Contract With America” proposal, the GOP swept both houses of Congress for the first time in 40 years.

The consequence: Bill Clinton executed a policy somersault worthy of the Flying Wallendas. He quickly abandoned many of his first-term proposals, including his wife’s health care plan, informing us that “the era of big government is over.” He now favored balanced budgets and apologized for having “raised [taxes] too much.” With the Republicans calling the shots, he enacted significant tax breaks for business and the middle class, including a 30% cut in the capital gains tax for individuals.

He also signed into law welfare reform legislation, which included popular work requirements that Reagan had placed in his own welfare reform law when he was governor of California. Clinton even used Reagan’s rhetoric to sell the bill he signed.

The measure proved stunningly successful, reducing caseloads by 50% and cutting child poverty in half. Robert Rector, The Heritage Foundation’s welfare expert, wrote much of the 1996 bill that Clinton eventually approved. Overall, the nation, as Galston notes, was clearly enjoying itself.

But let me put up numbers included in the 2016 column, just as glowing as Galston’s, but somewhat different in emphasis.

The unemployment rate had dropped to 4% by the end of Clinton’s presidency, the lowest level in more than 30 years. Joblessness for blacks and Hispanics had been sliced in half, down to 7% and 5%, respectively. The stock market more than doubled between 1998 and 2000. And a miracle occurred. We began paying off the national debt in colossal chunks—in no small part due to the nearly $1 trillion that was cut from the military because Reagan had won the Cold War.

Democrats don’t want to admit it, but the truth is Reagan’s conservative policies dominated the two decades that began with his victory over President Jimmy Carter in 1980.

Reagan’s first two terms produced substantially lower tax rates for individuals and corporations, domestic (nondefense) spending restraint and deregulation, which resulted in the end of those gas lines that had so plagued Carter’s presidency.

Reagan’s first executive order eliminated the price controls Carter clamped on oil and natural gas, which proved a disaster since, as Gingrich noted, “It limited us to buying gasoline every other day depending on the last number of our license plates. From scarcity of gasoline to abundance in six months—this was one of Reagan’s first evident accomplishments.” And the accomplishments kept coming.

Reagan’s first two terms produced lower tax rates for individuals and corporations, domestic (non-military) spending restraint and deregulation, a jobs growth explosion, and a major boom period that went 92 months without a recession (November 1982 to July 1990). At the time, this proved to be the longest peacetime period of sustained economic growth in U.S. history.

The late, great economics writer Warren Brookes noted that under the Gipper, the percentage of low-income families was declining. These folks were moving upward on the wage scale and securing major tax relief through higher deductibles and a tripling of the earned income tax credit. Six million of the poorest working Americans, Brookes pointed out, were dropped from the income tax rolls entirely, prompting the praise of even anti-Republican liberals. Black families made the most impressive gains.

And Reagan achieved something even more remarkable, which also had a profound economic and monetary impact. He brought down the Soviet Empire without dragging this country into war.

He gained this astonishing victory through rejuvenating our economy, rebuilding our military, and engaging in cunning diplomacy. He squeezed Russia economically, placed deadly missiles into Europe that threatened Moscow itself, and armed the Afghans with Stinger missiles—forcing the Russians out of the country they had so brutally invaded.

When Reagan refused to surrender his Strategic Defense Initiative in 1986 at Reykjavik, Iceland, Mikhail Gorbachev, eager to end hostilities with the U.S., decided to end the Cold War, realizing his country, even if it wanted to, could no longer compete with America either militarily or economically. (Gorbachev knew Reagan’s reliance on supply-side economics and his major military strategy, both so harshly mocked by the Democrats, were working all too well in putting his country on the defensive.)

Democrats love to take credit for the good things that happened in the last two decades of the 20th century. But since his election in 1980, Reagan furnished this country with the conservative policies that dramatically reversed Clinton’s disastrous first two years of liberal governance. He also made Clinton’s presidency far more comfortable with his canny strategy that compelled Gorbachev to surrender the Evil Empire.

Reagan, in short, was key to Clinton’s success, an indisputable fact the Clintonites can’t yet bring themselves to acknowledge.