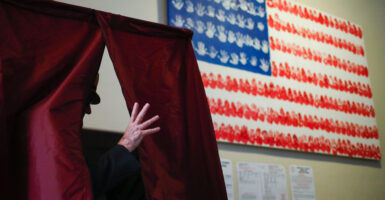 New Jersey resident Patrick DePaola first registered to vote in June 1927. A 50-year employee as a printer for The New York Times, he died at age 105 more than a decade ago, in December 2010.

But DePaola, who lived in Bayonne, remains listed as an “active” voter and is among 2,398 registered voters in New Jersey who appear to be 105 or older.

That’s according to a new report by the election watchdog group Public Interest Legal Foundation, which notes that the average life expectancy in New Jersey is just under 81.

But ages in the Garden State get even more unusual, the report indicates.

Other registered voters appear not to have been born yet, with birth dates such as Jan. 14, 2028, and Sept. 30, 2029, according to the legal foundation’s report.

These examples were among 33,572 voter registrants with what the report classifies as either “placeholder” or “fictitious” dates of birth. The most common such birthdate was Jan. 1, 1800.

“To be clear, [Public Interest Legal Foundation] does not conclude or suggest these are ineligible registrants, rather, PILF observes that these records simply do not demonstrate on their face to include an acceptable birth date,” the report says.

Last month, the legal foundation filed a federal lawsuit against the New Jersey Department of State to access copies of the procedures that explain how the state maintains its voter registration rolls.

Under the National Voter Registration Act of 1993, popularly known as the Motor Voter Act, states are required to regularly clean voter registration lists of names of voters who have died or moved.

This regular scrubbing is to maintain election security, because poorly maintained voter rolls could create avenues for fraud. which has been a problem for New Jersey in recent elections.

“New Jersey has some explaining to do in how it collects and maintains basic voter information,” J. Christian Adams, president of Public Interest Legal Foundation, said in a public statement. “As we have already demonstrated, PILF will pursue available remedies to correct often long-neglected government records.”

The legal foundation’s study also found that 8,239 New Jersey residents were registered twice or more under different variations of their names.

“New Jersey’s voter registration system, like nearly every other studied by PILF, can be tricked into registering a person multiple times with extremely similar biographical data inputs at the same addresses,” the report says, adding:

Two common first names were standouts, indicating a potential recurring, systematic error. Repeatedly, ‘Christopher’ and ‘Jaqueline’ were stored in duplicate with obvious clerical entry errors across the state. The pairings appeared as Christopher vs. Christoph and Jaqueline vs. Jacquelin. While the cause may be unknown at this time, this issue must be examined and addressed.