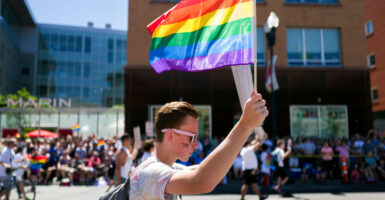 Pride Month festivities in a small town in Minnesota caused a stir, as well they should.

The event, East Central Minnesota Pride, took place Saturday in Pine City, population 3,113. Pride events are common in Minnesota, a state known for its left-wing values, but with a kinder, gentler “Minnesota Nice” ring to it. (I know because I grew up there.)

This year, the event featured Martina Marraccino (aka Martino Mayotte) as host. Marraccino is a drag queen whose gay-porn name is Adam Divine. Divine has a history of starring in pornographic videos.

According to Alpha News, a conservative site based in Minnesota, “In one video, he [engages in a sex act with] another male actor who is represented as his younger brother. This is far from his only incest-themed production.”

The Pride Month event has been an annual occurrence in eastern Minnesota for 17 years. PBS heralded it as an important fixture of Minnesota’s rural LGBTQ community, and it has reputable sponsors, such as the local library and Walmart.

Minnesota-based companies such as Target are listed as  sponsors. That’s no surprise, given Target’s new LGBT clothing collection in support of Pride Month. According to an event flyer, it is also funded by a taxpayer-subsidized grant from the East Central Regional Arts Council.

But this event seemed a bit too liberal, even for a state that has elected Sens. Al Franken and Amy Klobuchar and Rep. Ilhan Omar to office. In fact, it seemed like a misuse of taxpayer dollars, and it sent a toxic message to families with kids.

Divine’s Twitter account was so full of such crude posts featuring gay and incest-themed sex, it was temporarily suspended.

For his birthday one year, he asked followers on Facebook to donate to the Satanic Temple in his name because he believes in its cause. “Hail Satan,” one of his posts reads.

Ironically, Divine was supposed to host a Bloomington, Minnesota, Pride event last year, but the invitation was pulled after local residents discovered his sex-themed Twitter account.

Minnesota has been an LGBT-friendly state for decades, but it’s still hard to believe hardworking Minnesota families would support having their tax dollars help finance an event in which the host espouses incest, posts videos of gay sex online, and openly worships Satan.

Divine was to host the event as a drag queen, too. That likewise doesn’t seem appropriate for families or a great use of taxpayer dollars.

The state’s largest such event, Twin Cities Pride, received a $25,000 grant from the Arts and Cultural Heritage Fund, another taxpayer-funded entity. According to its website, “The Arts and Cultural Heritage Fund receives 19.75% of the sales tax revenue resulting from the Legacy Amendment to support arts, arts education, and arts access, and to preserve Minnesota’s history and cultural heritage.

Based on current sales tax revenue, Minnesotans will spend more than $1.2 billion on arts and cultural heritage fund projects and programs over the 25-year life of the tax.

The Legacy Amendment passed in 2008 and runs through 2034. A Minnesota House of Representatives report published in 2019 found that $66 million in taxpayer funds went to the Arts and Cultural Heritage Fund from 2016 to 2018 alone.

It’s time voters made known their opinions about how their tax dollars are spent.