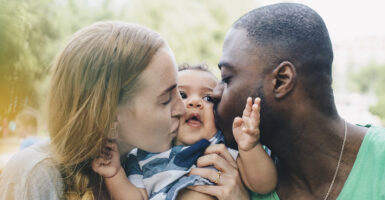 There’s a lot of fearmongering these days about what the leaked draft of a Supreme Court opinion potentially overturning Roe v. Wade would mean if it is, in fact, issued.

Believe none of it.

Serious and principled legal minds like professor Akhil Reed Amar of Yale and professor Sherif Girgis of Notre Dame have already done excellent work putting most of these lies regarding the upcoming decision in Dobbs v. Jackson Women’s Health Organization to the torch.

My task here is more modest—to finish their work by dismantling the most recent and most absurd claim: That the draft Dobbs opinion would lead to overruling Loving v. Virginia, which held that governments cannot ban or criminalize interracial marriage.

This argument has no merit whatsoever. Anyone with even a passing familiarity with the Constitution knows it.

This issue strikes home for me: I’m in an interracial marriage and I could not be less worried. I am as confident that Loving will remain good law as I am that the sun will rise in the east tomorrow and every day thereafter.

Why? Because the holding in Loving was compelled by the Constitution’s text. The holding in Roe v. Wade, on the other hand, was not.

The leaked Dobbs opinion says the same thing that Loving did: The court got it wrong, and it’s time we interpret the Constitution as it’s written and stop twisting it to mean what we want it to mean.

Loving was a 14th Amendment challenge to a law banning interracial marriage. The 14th Amendment guarantees the equality of all people regardless of race. Loving held that the amendment meant what it said.

For almost a hundred years before the Loving decision in 1967, the Supreme Court disregarded that amendment. Beginning with the Slaughter-House cases and United States v. Cruikshank and culminating in the constitutional abomination that was Plessy v. Ferguson, the Supreme Court all but erased it from the Constitution. The court held that the amendment, which was ratified to make all people equal in the eyes of the law, did nothing of the sort.

The court was wrong. Egregiously, obviously, infuriatingly wrong. Loving was one of many great cases that fixed that error.

The key mistake in logic made by those who think Dobbs will pose a threat to Loving is that they think that Loving created a right to interracial marriage just as Roe created a right to abortion. It did no such thing. That right is inherent in our nature. Loving simply recognized what the 14th Amendment says: The government may not discriminate by race.

The Dobbs draft, therefore, has nothing to say about Loving. The draft says, rightly, that Roe was “egregiously wrong” and its reasoning “exceptionally weak” and “far outside the bounds of any reasonable interpretation of the various constitutional provisions to which it vaguely pointed.”

It says, rightly again, that the court “has neither the authority nor the expertise” to decide debates about the interrelationship of science and morality; those are debates for the democratic process.

What the court can and should do in Dobbs is affirm that the Constitution’s text means what it says, which is exactly what it did in Loving.

Loving is going nowhere. Anyone who argues otherwise is wrong and is either betraying his ignorance or worse, lying to you.