Leftists See Much More Than Abortion at Stake in Dobbs Decision 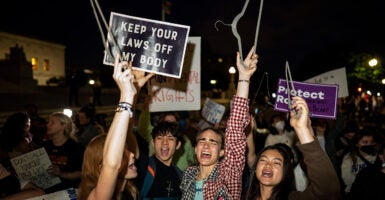 After a leaked Supreme Court draft decision, the left believes the end of Roe will usher in a fascistic hellscape. Pictured: Protesters gather in front of the Supreme Court in Washington, D.C., on May 3 to advocate for abortion. (Photo: Kent Nishimura/Getty Images)

That draft decision, reportedly supported by a majority of the court, including Justices Clarence Thomas, Neil Gorsuch, Brett Kavanaugh, and Amy Coney Barrett, junks Roe in its entirety, denying the existence of any constitutional “right to abortion.”

The majority opinion also trashes Roe’s follow-up case, Planned Parenthood v. Casey (1992), which substituted a vague and unworkable “undue burden” test to determine whether or not a law restricting abortion was unconstitutional in place of Roe’s trimester framework.

Alito writes, “The Constitution does not prohibit the citizens of each State from regulating or prohibiting abortion. Roe and Casey arrogated that authority.”

Alito is, of course, correct. Roe is a legal abomination with no support in the Constitution’s text, our nation’s history, or any legal precedent.

The Supreme Court merely usurped power in order to jam down its political opinions on millions of Americans; Roe didn’t end national controversy on abortion, it froze it in place, preventing states from adopting regulations tailored to their voters. Overturning Roe would merely restore the question of abortion to the states; New York would continue to allow abortion until birth, while Texas would ban nearly all abortion.

But according to the left, the end of Roe will usher in a fascistic hellscape.

Senate Majority Leader Chuck Schumer called the decision a “dark and disturbing day for America,” even as Democrats called for attempting to nuke the filibuster to codify Roe into federal law.

Sen. Elizabeth Warren, D-Mass., said she was “angry and upset … The Republicans have been working toward this day for decades. They have been out there plotting, carefully cultivating these Supreme Court justices so they could have a majority on the bench who would accomplish something that the majority of Americans do not want.”

Naturally, Warren was unwilling to explain why, if so many Americans support her point of view, she is opposed to allowing them to vote on the issue. But the answer is clear—as clear as the reason why the left is perfectly sanguine about someone leaking the draft decision in the first place: Democratic norms, the Constitution, and principle are of no consequence. All that matters is result.

The left has viewed the Supreme Court as a preserve for progressive policymaking for decades. The Dobbs v. Mississippi decision would restore the court to its original role: an impartial arbiter of the law, rather than a left-wing super-legislature. And the left cannot abide that possibility. It would prefer a Supreme Court that imposes leftist social priorities from above.

That is particularly true when it comes to abortion, the most vital leftist sacrament, an action of holy import.

For the left, abortion represents the power to deny the objective value of human life; it represents willingness to engage in the highest form of self-serving moral relativism. Absence of abortion presents the possibility that actions have moral consequence, that the value of life is not an arbitrary and subjective one, that women and men have duties to their children. All of which challenges its basic worldview.

To have that logic subjected to the voters is an indignity the left cannot bear. And it will use every tool in its arsenal to prevent that possibility.