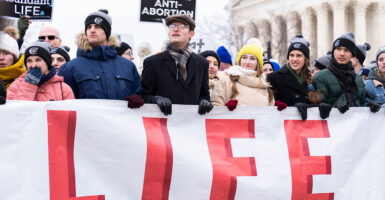 A recent Wall Street Journal poll found that more American voters support a ban on abortion after 15 weeks than oppose it.

“With lawmakers in several states pushing forward with bills that would ban abortion after 15 weeks of pregnancy, 48% of voters said they would strongly or somewhat favor such restrictions, with exemptions to protect the life of the mother, while 43% were in opposition,” the poll, released Friday, found.

As the country awaits the Supreme Court’s decision in the case of Dobbs v. Jackson Women’s Health Organization, an increasing number of states are passing legislation limiting abortion.

The Dobbs decision, expected to be announced in late June, will rule on the constitutionality of previability bans on elective abortions. Those are laws prohibiting abortion before a baby can survive outside of the womb. The case centers on a Mississippi law banning most abortions after 15 weeks, and the Supreme Court’s decision has the potential to overturn the controversial landmark 1973 abortion case Roe v. Wade.

At least 12 states have trigger laws that would ban most abortions in the event Roe v. Wade is overturned.

In recent weeks, five states have taken action to limit abortion as the country prepares for the Dobbs decision.

1) Arizona: Arizona Gov. Doug Ducey on March 30 signed SB 1164, which mirrors the Mississippi law in the Dobbs case, banning most abortions, including in instances of rape and incest, after 15 weeks. The law includes exceptions if the mother’s life is in danger.

The law is expected to save hundreds of babies each year. In 2020, 636 abortions were performed in Arizona after 15 weeks, according to the Arizona Department of Health Services records.

“In Arizona, we know there is immeasurable value in every life—including preborn life,” Ducey wrote in a letter. “I believe it is each state’s responsibility to protect them.”

2) West Virginia: West Virginia Gov. Jim Justice signed the Unborn Child with Down Syndrome Protection and Education Act on March 21, which was World Down Syndrome Day. The law will take effect in June and bans abortions based on the possibility the child will be born with a disability.

3) Oklahoma: Oklahoma’s state House passed a bill that goes further than Texas’ Heartbeat Act by banning abortions after conception, with exceptions for rape, incest, and medical emergencies. The Oklahoma state Senate is expected to vote on the bill this week.

4) Kentucky: The Kentucky General Assembly passed a bill that would ban most abortions after 15 weeks, restrict access to abortion drugs, and restrict abortion access for minors. The bill, which is headed to Kentucky Gov. Andy Beshear’s desk, would require abortion clinics to cremate fetal remains and issue birth-death certificates for every abortion.

5) Idaho: Gov. Brad Little signed into law a bill banning abortions after six weeks, like Texas’ law. The Idaho law, set to go into effect on April 22, allows any father, grandparent, sibling, aunt, or uncle of the preborn child to file a civil lawsuit against a medical professional who attempts or performs an abortion on the mother.

According to Melanie Israel, a policy analyst in the DeVos Center for Religion and Civil Society at The Heritage Foundation, a post-Roe world would allow abortion policies to return to the states and the American public at large, as they were before the 1973 ruling. (The Daily Signal is the news outlet of The Heritage Foundation.)

“Should the Supreme Court change course on Roe, abortion policy would return to the states, and the American people, through the democratic process, could further address outdated and extreme abortion laws with policies that are not subject to the arbitrary and unworkable viability standard,” Israel wrote.