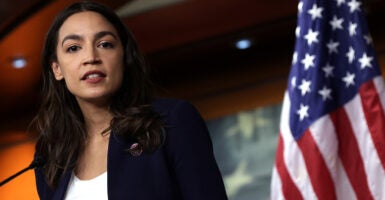 In a barrage of smears against Republicans after the Texas shooting, Rep. Alexandria Ocasio-Cortez, seen here speaking on Dec. 8 in the U.S. Capitol, tweeted, “There is no such thing as being 'pro-life' while supporting laws that let children be shot in their schools.” (Photo: Alex Wong/Getty Images)

Before we even knew how the killer of 19 children and two adults at Robb Elementary School in Uvalde, Texas, had obtained his guns, Sen. Chris Murphy was engaging in his customary performative emotionalism on the Senate floor, literally begging Republicans to “compromise.”

Compromise on what exactly? Murphy has never once offered a single proposal that would have deterred any of these mass shooters. Literally minutes after his routine, Murphy was asked about the obvious mental illness prevalent among most of these shooters. “Spare me the bulls— about mental illness,” the Connecticut senator responded, “ripping” the GOP. “We don’t have any more mental illness than any other country in the world.” That’s how serious he is about compromise.

Whether America is more prone to mental illness or not, these incidents are almost exclusively perpetrated by young men who have exhibited serious antisocial behavior. All of them break a slew of existing laws. All of them have either obtained guns illegally, or legally before having any criminal record. In many, if not most, cases, the shooter is already on the cops’ radar because he has threatened others or written insane, violent manifestos.

In a study of mass shootings from 2008 to 2017, the Secret Service found that “100 percent of perpetrators showed concerning behaviors, and in 77 percent of shootings, at least one person—most often a peer—knew about their plan.”

Rather than focusing on these tangible entry points for potentially useful legislation, instead of proposing ideas on better identifying shooters before they act, instead of thinking about how schools could be structurally safer, instead of debating the efficacy of putting more cops in schools—and none of these are panaceas, mind you—Senate Democrats were busy dunking on Republicans for failing to support bills that have absolutely zero to do with mass shootings.

Sen. Chuck Schumer planned to introduce HR 8, an expanded background check bill, and HR 1446, a bill that would close the alleged “Charleston Loophole” (before he realized it wouldn’t be politically expedient). “Alleged” because Dylann Roof, who murdered nine black churchgoers in Charleston, South Carolina, in 2015, got a clean background check, not because of any “loophole,” but because local prosecutors had failed to respond to the FBI’s request for information. It was a case of human error, or negligence.

So maybe Democrats should be promoting a “law enforcement should do its job” bill. Because all “universal” background checks do is stop friends and families from gifting guns. Straw purchases are already illegal, as Schumer, House Speaker Nancy Pelosi, and Murphy already know. And passing expanded background checks after a school shooting is tantamount to demanding stricter drivers tests after a hit and run.

Democrats, obsessed with largely irrelevant issues like AR-15s and “universal background checks,” are largely living in the early 1990s. President Joe Biden’s address to the nation consisted of a litany of hackneyed talking points he’s been regurgitating for decades now—including that transcendently stupid joke about deer in Kevlar. “As a nation, we have to ask, when in God’s name are we going to stand up to the gun lobby?” Biden said—again.

Democrats love to hammer the strawman “gun lobby” because they don’t want to openly attack tens of millions of gun owners. The National Rifle Association, whose power has significantly diminished over the past decades, could disappear tomorrow and it wouldn’t alter gun policy one bit. Either another organization would emerge—probably a more rigid one—or gun owners and Second Amendment advocates (we’re in the midst of the largest expansion of gun ownership in American history) would continue voting for politicians who oppose restrictions aimed at peaceful gun ownership.

Meanwhile, Republicans will have to deal with a barrage of preposterous smears. “There is no such thing as being ‘pro-life’ while supporting laws that let children be shot in their schools, elders in grocery stores, worshippers in their houses of faith, survivors by abusers, or anyone in a crowded place,” Rep. Alexandria Ocasio-Cortez, D-N.Y., tweeted.

This was indicative of the sort of demented accusation thrown around these days. One suspects liberals who take to the internet to accuse Republicans of abetting infanticide aren’t really interested in compromise. Unlike Ocasio-Cortez, who champions laws that empower people to terminate the lives of the viable unborn, I don’t know of a single Republican who supports the gunning down of elementary school children.

Indeed, law-abiding Americans have no obligation to take ownership of a madman’s actions. Nor is there any reason for them to surrender their right to self-defense so that Murphy, who, evidenced in many of his comments, is only interested in incrementally limiting gun ownership. That’s his right, of course. He should try to repeal the Second Amendment.

Until then, however, Democrats interested in genuine compromise may want to offer realistic, productive, and germane ideas, rather than using another horrific tragedy to dunk on their political opponents.