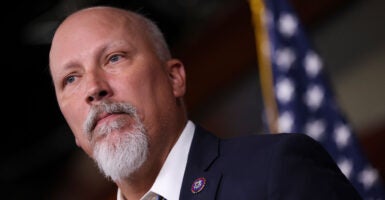 Rep. Chip Roy, R-Texas, was accused of using inflammatory language by Dr. Yashica Robinson when he asked her about late-term abortions she had performed. Pictured: Roy speaks at a news conference at the U.S. Capitol in Washington, D.C., Sept. 22, 2021. (Photo: Kevin Dietsch/Getty Images)

An abortion doctor accused Rep. Chip Roy, R-Texas, of using inflammatory language when he asked her Wednesday during a House Judiciary Committee hearing about late-term abortions she had performed.

Dr. Yashica Robinson, an Alabama-based OB-GYN and pro-abortion advocate, said she has performed abortions as late as 20 weeks. But Robinson refused to give a direct answer about how she handled human remains after abortions, and criticized Roy’s phrasing.

Rep. @chiproytx: “What is the latest you have performed an abortion?”

Roy: “Have you had baby parts that you’ve had to discard or store?”

“The procedure for an abortion, when we’re talking about at 20 weeks, as I understand it, is dilation and extraction. Have you performed abortions in that stage and, in doing so, have you had baby parts that you’ve had to discard or store in some capacity?” Roy asked.

Robinson refused to directly answer the question and instead complained about Roy’s word choice.

“One of the things you all have done throughout this hearing is just use inflammatory language as you talk about the care that we provide,” she said, as Roy talked over her and continued to demand a direct answer. “I am a physician and a proud abortion provider. There is nothing that you can say that makes it difficult for me to talk about the care that I provide.”

Roy referenced videos released in 2015 in which a Planned Parenthood executive in Houston admitted that the organization harvested fetal organs and gave them to researchers to cover the organization’s expenses.

“There are baby parts and you don’t want to talk about how they’re being stored,” Roy told Robinson, adding:

Robinson denied having stored baby parts in the ways Roy described, but did not answer whether she ever had to store or dispose of fetal body parts.

“All of those things that you just mentioned, I have never seen those in a health care setting, ever. We don’t put baby parts in freezers or Pyrex dishes,” she said.

Roy and Robinson did not respond to the Daily Caller News Foundation’s requests for comment.