Kansas Town Reverses Decision, Will Keep ‘In God We Trust’ on Police Cars 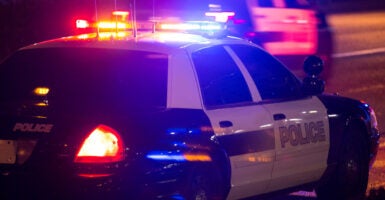 Haven, Kansas, City Council members have changed their minds about getting rid of “In God We Trust” decals on police vehicles. (Photo Illustration: Matt Gush/Getty Images)

Family Research Council is a nonprofit research and educational organization dedicated to articulating and advancing a family-centered philosophy of public life.

The small city of Haven, Kansas, was bustling Monday evening as residents and journalists gathered for a City Council meeting. On May 3, council members hastily voted to remove the “In God We Trust” decals from police vehicles. But the residents responded to this move with great resistance.

Mayor Adam Wright said he received more than 100 emails from citizens who opposed the abrupt removal of the national motto from police vehicles. Now they packed the community center to voice their thoughts on the move and witness a re-vote.

In support of Haven residents, FRC Action launched a petition last week to inform its nationwide readers of the matter and encourage civic engagement.

Brent Keilen, FRC Action vice president, reports that 19,568 people signed the petition and more than 500 of those were individuals in Kansas.

Carrying a heavy folder with the names of all who took a stand against the council’s decision, the Family Research Council’s Tim Throckmorton arrived at the meeting last night. Since he is not a resident of Haven, Throckmorton would not ordinarily be permitted to address the attendees, but Wright gave up his time for the Family Research Council’s representative to speak.

In his brief remarks, Throckmorton emphasized that approximately 250 law enforcement offices around the country have “In God We Trust” on their vehicles. He talked about the growing concern that God is being removed from the public square at every level and ended by delivering a stack of papers with the names of each of the 19,568 petitioners. The attendees erupted in applause.

“The attendees were grateful for FRC and thankful we made the trip all the way here for this issue,” Throckmorton said.

According to Throckmorton, the council members were hesitant to take action because of the large crowd. One of them suggested that they table the matter until there is less pressure, to which the citizens responded, “There’s always going to be pressure.”

The council members ultimately listened to their constituents and decided to keep the “In God We Trust” decals by a vote of 3-2.

“I am so pleased with the decision the council made. They heard the citizens that came up and spoke and said, ‘We didn’t agree with the previous unilateral decision,’” Haven resident Mary Andresen said in an interview with channel KWCH12.

“As situations like this illustrate, it’s important that citizens are weighing in at every level of government—be it federal, state, or local,” Keilen said in response to the news. “When we stand together and make our voices heard, it can make a real difference in our communities.”