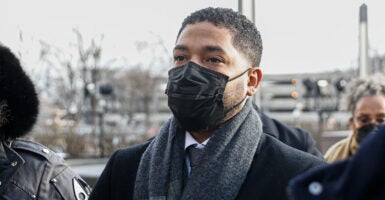 Actor Jussie Smollett arrives at court for his hate crime hoax trial on Dec. 7 in Chicago. Even the self-appointed "fact-checker" PolitiFact can't deny Smollett's claim of being a victim of a hate crime was a hoax. (Photo: Kamil Krzaczynski/AFP/Getty Images)

During a recent broadcast, I said that once Elon Musk takes control of Twitter, “Twitter will be flooded with hate, and a lot of it will come from people on the left who want to show how hate-filled it is. It’s like their race-hoax industry. If you see a noose on a college dorm of a black student, the odds are overwhelming that the noose was put there by a black student. If you see the ‘N-word’ on a dormitory building, the odds are overwhelming that a black student actually did that. We’re filled with race hoaxes.”

One of the better-known self-proclaimed fact-checkers, PolitiFact, declared my claim “false.” It offered no refutation of what I said and provided no examples of nooses or the N-word on campuses perpetrated by white supremacists. Instead, it made a self-defeating argument:

Experts who track hate crimes told PolitiFact that there isn’t even a nationwide data source that Prager could have used to pin down the number of incidents—real or fake—that specifically involved hanging a noose or scrawling the racist insult on college buildings or grounds.

So, if there is no such database, how could PolitiFact declare what I said “false”? At most, it could say “maybe true, maybe false.” Then it quotes a man who devotes his professional life to lying about how racist America is: Brian Levin, director of the Center for the Study of Hate and Extremism at California State University in San Bernardino.

“Mr. Prager is long on hyperbole and bigotry, and short on facts,” said Levin. “What Prager claimed ‘is a lie.’” The very fact that PolitiFact cites Levin proves how unserious PolitiFact is about pursuing truth.

PolitiFact cites FBI statistics—about “all hate crimes,” not about campus nooses or N-word graffiti on dormitories, which is specifically what I spoke about. That was another dishonest ploy on PolitiFact’s part.

Moreover, if you look up all the examples of “hate crimes” on the FBI list, the list is completely irrelevant to what I said. It lists hate crimes regarding “gender,” “gender identity,” “disability,” “commerce violations,” “drug offenses,” “gambling offenses,” and many more examples of hate crimes having nothing to do with racism, let alone racism on campuses.

It was fraudulent of PolitiFact to cite the FBI stats. So, then, here are just a few examples of race hoaxes concerning graffiti and nooses on campuses over the last 15 years. If PolitiFact can show that these examples are not in fact hoaxes or, alternatively, provide an equal number of verified examples, PolitiFact’s assessment of my claim may be valid. If PolitiFact cannot do so, it lied.

The subsequent investigation revealed that Constantine made it all up. And it also turned out that the racial controversy about a “noose incident” in Jena had nothing to do with a noose.

Activists implied the incidents were tied to Black History Month, as was a menacing person on campus who allegedly donned a “KKK hood and robe” near a black dormitory known as “Afrikan Heritage House.”

It was all a hoax. No one wore a KKK hood and robe. It was a woman wearing a coat. Cornell University law professor William Jacobson, who tracked the Oberlin story on his blog Legal Insurrection said the fraudulent incidents “may be the greatest race hoax since Tawana Brawley.”

In 2017, The College Fix chronicled 17 race hoaxes on campuses.

One example: “The University of Southern California’s Department of Public Safety confirmed that the person who had adhered a sign reading ‘No Black People Allowed’ that featured a makeshift Confederate flag and ‘#MAGA’ on a gate of a campus residence was African American.”

Another example: “Some black Air Force Academy cadets discovered racial slurs written on their dorm doors, including ‘Go home n—–.’” Two months later, a black student was determined to have written the slurs.

PolitiFact is owned by the Poynter Institute, a left-wing organization funded in part by George Soros. The primary purpose of Poynter and PolitiFact is to malign conservatives, just as they did me. But the real punk in this story is Levin, the director of the hate center known by its Orwellian name, the Center for the Study of Hate and Extremism.

Let him provide an equal or greater number of true examples of N-word graffiti and nooses on campuses placed by white supremacists. If he doesn’t, he is lying. Which would not be surprising. As I’ve said all of my life, truth is a liberal value and it is a conservative value. It is not a left-wing value.