Once Things Begin to Break Down, Violence Can Escalate 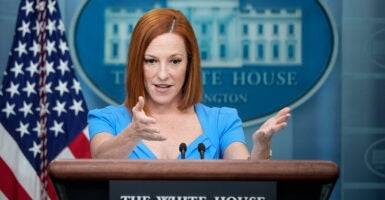 The answer, of course, is both are completely unacceptable. These are not things normal people need to debate. A man’s home is his castle. Does that ring a bell? It’s an English legal concept adopted by the American Founders and reflected in the U.S. Constitution’s Fourth Amendment.

Families shelter in homes to protect each other from the outside world. It’s a sanctuary. Accosting people in churches is even worse; they’re literally sacred places. Anyone who violates these fundamental concepts will pay a steep price politically. More importantly, anyone taking these radical steps is furthering America’s sad decline.

In the wake of the leaked draft of the Supreme Court abortion decision, left-wing groups began agitating online. They posted the home addresses of the conservative justices. They called for “direct action” at those homes. They called for allies to disrupt church services.

The Biden administration was silent. The press secretary was asked directly about protesters going to the justices’ homes. She would not denounce it. It’s not a complicated question.

The answer, of course, is the president opposes public intimidation of judges and their families in their homes, and he opposes anyone who would disrupt people as they are trying to worship God. Only a pure incompetent or a hardened radical would not understand this.

As with their refusal to clearly call out the “open borders” and “defund the police” lunacy at the outset, it boggles the mind that people paid to advise a president of the United States would botch an issue this simple.

Marching up a suburban block trying to look as intimidating as possible and screaming the F-word and the C-word is not a winning strategy. Polling shows how universally unpopular this behavior is. It’s hard to find an issue with as much consensus.

A worse strategy is resorting to violence. A pro-life group in Wisconsin was firebombed and spray-painted with, “If abortions aren’t safe then you aren’t either.” A second pro-life group in Oregon was also hit with Molotov cocktails. Someone fired a gun into the home of a Republican attorney general.

The press is doing their best to downplay the violence. It does not fit their preferred narrative. But the truth is getting out, and the Biden administration has now backtracked and spoken out against the violence and the protests at private homes. The attorney general has belatedly asked the U.S. Marshals to ensure the justices’ safety.

It’s illegal to threaten judges. The law specifically prohibits going to judges homes to try to influence their decisions. All that is clearly happening. Will the Justice Department take action?

Other Democrats are unwilling even to denounce the harassment. Senate Majority Leader Chuck Schumer, D-N.Y., directly threatened the justices back in 2020: “I want to tell you, [Justice Neil] Gorsuch. I want to tell you, [Justice Brett] Kavanaugh. You have released the whirlwind, and you will pay the price. You won’t know what hit you if you go forward with these awful decisions.”

After saying something that vile in the past, you would think Schumer would be eager to clear up his intentions. He has, to date, refused to denounce the protests at private homes.

In the short term, the Democrats may be taking a political win and handing it back. Americans are divided over abortion. A majority are pro-choice, but only a tiny minority are for the far left’s position of abortion on demand right up to birth. This will play out in the political system now more than ever if the draft opinion holds up. By tying themselves to the radicals in their party, the Democrats are taking a potential political win and turning it into a loss.

In the long run, the bigger problem is the continued downward spiral of America. Once norms are shattered, they aren’t easy to rebuild; it’s a constant escalation. Democrats seem to understand this when it comes to the horrible behavior of some Republicans on Jan. 6. The same is true here. Once Supreme Court clerks start leaking drafts to try to sway the process, it’s more likely to happen again. A great institution will become just another political arm.

Once radicals start harassing justices in their homes, it’s likely to continue and escalate. Once firebombings are part of the political process, they are more likely to continue and escalate. If it’s OK to scream in front of someone’s home, then why not throw things at it? Once you are throwing things, why not attack the cars? If it’s all so justified, maybe attacking a person is as well. This is the downward spiral America is on.

After a multidecade run of relative peace and prosperity, Americans seem to think that’s the natural state of things. That’s all most of us have ever known. Once things begin to break down, violence can escalate.

This is how countries end up in civil wars. It’s how revolutions happen. The Capitol building is overrun. The top Senate Democrat threatens Supreme Court justices. Crazies descend on residential neighborhoods. Buildings are firebombed. None of this is OK.