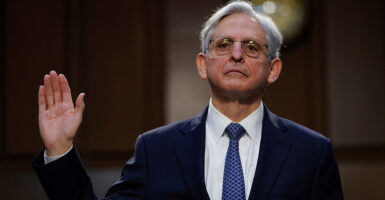 Despite Attorney General Merrick Garland’s denials, House Republicans claim to have evidence that the FBI’s Counterterrorism Division investigated parents for raising concerns about their children’s schools. Pictured: Garland is sworn-in during his confirmation hearing on Feb. 22, 2021, in the Senate Office Buildings in Washington, D.C. (Photo: Drew Angerer/Getty Images)

Whistleblowers allegedly provided evidence to House Republicans showing the FBI targeted parents who raised concerns about local education issues through its counterterrorism unit, according to a letter from Republicans on the House Judiciary Committee.

The FBI’s Counterterrorism Division opened “at least dozens of investigations” into concerned parents through an EDUOFFICIALS “threat tag,” according to a letter from Republicans on the House Judiciary Committee addressed to Attorney General Merrick Garland that cited anonymous whistleblowers. Examples allegedly provided by the whistleblowers detail complaints made by those who opposed parents’ viewpoints on school curricula, mask mandates, and vaccine requirements.

In November, a Department of Justice whistleblower released an FBI-wide email that showed the Counterterrorism Division had created the threat tag to target concerned parents at school board meetings. The next day, Garland denied that the Department of Justice was investigating parents during sworn testimony.

As part of one investigation, the FBI interviewed a mother who belonged to the group Moms for Liberty for reportedly telling a school board “we are coming for you,” which she said was a warning to school officials that they could be replaced in an upcoming election, according to the letter. The complaint reportedly said she was a threat because she “is a gun owner” and a member of a “right wing mom’s group.”

A father was also investigated by the FBI because he reportedly “rails against the government,” “believes all conspiracy theories,” and “has a lot of guns and threatens to use them,” which “fit the profile of an insurrectionist,” the letter said. In an interview with authorities, the complainant reportedly said they had “no specific information or observations of … any specific crimes or threats.”

Another FBI field office investigated Republican state officials over claims from a Democratic Party official that they had “incited violence for public expression of discontent with vaccine mandates in public schools,” according to the letter.

A now-deleted Sept. 29, 2021, letter from the National School Boards Association asked the Biden administration to use statutes such as the Patriot Act to stop threats and violence directed toward school board members over actions that it said could be “the equivalent to a form of domestic terrorism and hate crimes.”

Garland issued a memorandum four days later that called on the FBI to “use its authority” against parents who threaten or use violence against public school officials, citing a “disturbing spike in harassment, intimidation, and threats of violence.”

The House Judiciary letter calls the FBI investigations a “direct result” of Garland’s memorandum, which the committee again called on the DOJ to rescind.

“This information is evidence of how the Biden administration is using federal law enforcement, including counterterrorism resources, to investigate concerned parents for protected First Amendment activity,” the letter reads.

The Department of Justice did not respond to the Daily Caller News Foundation’s request for comment.