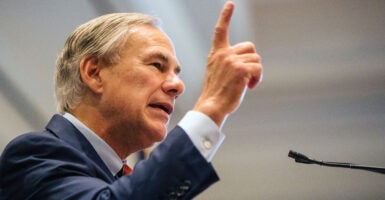 The image of Lucy yanking away the football from Charlie Brown has been invoked for years as a metaphor for Texas’ relationship with school choice.

But is the Lone Star State finally about to connect?

On Monday night, Texas Gov. Greg Abbott called on the Legislature to allow education dollars to follow children to learning options of their parents’ choice, including to private schools.

“Empowering parents means giving them the choice to send their children to any public school, charter school, or private school with state funding following the student,” the governor said, adding that school choice “is going to give all Texas children a better chance to succeed.”

Abbott’s leadership on this important issue is a major, positive step for educational freedom in Texas. The state’s policymakers should now heed the call and establish universal education savings accounts for all Texas children.

Every child should have the opportunity for a great K-12 experience—and the chance to succeed in school and in life. Education savings accounts can offer this on-demand education experience for children from all walks of life.

The governor’s proposal has come at the right time.

Parents are already signaling that assigned public schools are not meeting their children’s needs. Like state and school district officials around the country, the Texas Education Agency reported a marked decrease in public school enrollment statewide during the 2020-2021 school year.

Curiously, while some districts, such as Fort Worth, are reporting historic enrollment decreases, others, such as Liberty Hill, northwest of Austin, saw sharp increases as families moved to more popular areas within the state.

At the same time, the Texas Homeschool Coalition reports that the number of homeschooling families increased by almost 300% in 2021. That means Texans are watching a shift in how and where families choose to live and raise their families.

Among black and Hispanic students, the percentages who can read proficiently drops to 11% and 19%, respectively.

Currently, fewer Texas students can read proficiently than could do so in the late 1990s. Mathematics outcomes don’t fare any better.

It should come as no surprise, then, that school choice also increases parental satisfaction.

The small but disproportionately vocal minority that still opposes education freedom in Texas is largely confined to the halls of the Texas Education Association, the state teachers union.

Unions are out of step with Texas families, 74% of whom support education savings accounts. With an account, the state deposits a portion of a child’s funds from the state K-12 formula in a private account that parents use to buy education products and services.

These accounts allow families to customize their child’s education by selecting textbooks and personal tutors, paying for private school tuition if they choose, and even saving money from year to year, to name just a few options.

In fact, research from North Carolina found that more than 60% of participating families are using an account to access more than one learning option at the same time.

For some parents and students, they may want a private school that aligns with their personal beliefs. Others may need an education therapist and individualized technology to help a child with special needs.

Families across Arizona and Florida, along with children in North Carolina, Tennessee, and Mississippi, are using the accounts, and lawmakers in West Virginia, Kentucky, Missouri, New Hampshire, and Indiana have approved proposals in recent years to create similar account options.

Furthermore, supply is sure to meet demand once families can control their share of education funding. New schools will spring up and existing private schools may add additional campuses.

Other claims that parents will misspend money have also been debunked by research. In Arizona, an auditor general’s report found that misspending amounted to just 1% of account funds—and some of this misspending was attributed to the state Department of Education’s poor guidance for families on allowable expenses.

Officials in other states, such as North Carolina, have adopted new tools to help prevent inappropriate spending before it takes place.