Education Savings Accounts Are the Next Generation of School Choice 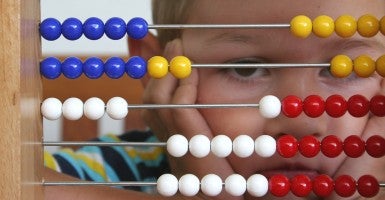 “A blind student in Arizona gets about $21,000 a year,” says Marc Ashton, whose son, Max, is legally blind. That $21,000 represents what Arizona spends to educate a student such as Max in the public-school system.

“We took our 90 percent of that, paid for Max to get the best education in Arizona, plus all of his Braille, all of his technology, and then there was still money left over to put toward his college education,” Marc explains. “So he is going to be able to go on to Loyola Marymount University, because we were able to save money, even while sending him to the best school in Arizona, out of what the state would normally pay for him.”

How did the Ashtons do it? Thanks to Arizona’s innovative education savings account (ESA) option, they were able to take 90 percent of the funds the state would have spent on Max in the local public school, and instead create a customized education plan for him. In Arizona, those eligible for an ESA include children in underperforming schools, foster children, children of active-duty military families, and children with special needs and their siblings.

Parents receive a debit card loaded with their child’s education funding — just the state portion, no local or federal education dollars — and can then use that money to pay for a variety of education-related services and products.

That flexibility is why education savings accounts represent the next generation of school choice.

Distributions to ESAs are made quarterly, with each quarter’s allocation being deposited after the family has submitted receipts for the previous quarter’s education expenses to the state Department of Education. In the event there was a misuse of funds, the subsequent quarter’s payment can be withheld and used to rectify the issue.

The amount of money distributed into a family’s ESA depends on student-specific factors. In Arizona, as of 2012, children in foster care, in active-duty military families, or assigned to an underperforming public school received approximately $2,800 per year (90 percent of the state per-pupil allocation of approximately $3,100). An expansion in 2013 increased the average award to roughly $5,300.

Children with special needs receive significantly larger distributions according to their disability. In the Ashtons’ case, as we saw, this meant about $21,000 per year, although, on average, students with special needs in Arizona are awarded approximately $13,500.

ESAs operate on the philosophy that parents are best equipped to make the important decisions about their child’s education. For their part, parents who choose to participate in the ESA option sign a contract agreeing to ensure that their children receive an education in the core academic subjects.

While the Ashtons used the bulk of their ESA to pay for tuition at a private school, they were also able to direct dollars toward Max’s assistive technology to facilitate his learning, along with his Braille textbooks and talking computer. And as Marc mentioned, they still had money left over at the end of each year to roll into a college savings account, which Max will put toward his tuition at Loyola Marymount this fall.

That is just one of the helpful features of ESAs: Unused funds can be rolled over each year  into a college savings account. Any ESA dollars that are still unused return to the state after college graduation or four years after the child graduates from high school.

Since families know they can save unused funds, they’re motivated to consider whether they’re getting the best education possible for the money they’re expending from their ESA. That consideration holds the promise of putting significant downward pressure on tuition costs as the ESA option becomes more widespread.

In addition to paying private-school tuition and rolling over funds for college, parents can use their ESA to pay for private tutoring, online learning, special-education services and therapies, textbooks, curricula, and a host of other education-related expenses.

As forward-thinking as Friedman was about school choice, he was perhaps even more innovative than many education-reform advocates realize. The father of the school-choice movement was also the father of education savings accounts.

“Why is it sensible for a child to get all his or her schooling in one brick building?” Friedman pondered in a 2003 interview with Columbia Teachers College professor Pearl Rock Kane. “Why not have partial vouchers? Why not let [parents] spend part of a voucher for math in one place and English or science somewhere else?”

Why not, indeed? Such flexibility becomes even more important as online learning proliferates, offering, among other things, course choice and innovative “micro schools.” It is becoming critical that education financing is restructured in a way that enables parents to direct every dollar allotted for their child’s education to their choice of services, products, and providers.

Fewer than two-thirds of high schools across the country offer physics, and just half offer calculus, according to Michael Horn, an education-innovation guru. As school choice advances and becomes even more granular, new and refined financing mechanisms such as ESAs offer a promising path forward for ensuring that students have access to a wide-open world of content.

That’s the heart of the philosophy that undergirds the move to education savings accounts. ESAs enable education funding to be student-centered, not institutional. ESAs continue the tradition of publicly financing education, but allow those dollars to harness the power of a market that has improved outcomes in nearly every other aspect of American life.

Although the Ashtons are among the roughly 66 percent of Arizona families with ESAs who are using them in a way similar to a private-school voucher, some families are eschewing brick-and-mortar schools altogether and are completely tailoring their own children’s education using their ESAs.

“We’ve done a schooling-at-home program now for two years with the teacher,” explains Kathy Visser, mom to Jordon, a ten-year-old ESA participant who has cerebral palsy. “She’s got the visual knowledge to work with his vision, and she’s a special-ed teacher.

“Workbooks, and mathematics, and manipulatives. We are developing his curriculum based on his needs. That is a huge advantage for us,” says Jordan’s father, Christo.

School choice has been proliferating like never before over the past few years. Forty-one private-school choice programs are now serving more than 300,000 students in 24 states and the District of Columbia. ESAs build on this momentum, and offer the option of complete educational customization.

Over 70 percent of participants in the ESA program are satisfied with it, according to a recent survey by the Friedman Foundation for Educational Choice. A principal reason is that they feel they aren’t locked in to what their local public-school district does, but can finally direct their children’s education.

“I am seeing children [who] are blossoming that were not in the traditional system,” Kathy Visser says. “And to me, that’s accountability.”

Originally appeared in the National Review.