The Future of School Choice: An Education Savings Account for Every Child 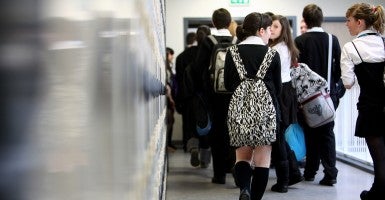 This week, over 11,000 educational choice events occurred in every state across America—with millions in attendance— to commemorate the 5th annual National School Choice Week. School Choice Week celebrates the thousands of children around the nation benefiting from parental choice in education and encourages more states to adopt policies providing all students an opportunity to choose a quality education.

Educational choice operates out of the conviction that every child is unique and has unique learning needs, and can take many forms: public and private school choice, charter schools, tuition tax credit scholarships, vouchers, online learning and education savings accounts.

Education savings accounts are particularly innovative because they allow parents to choose from among multiple services and providers using their child’s education funding. With an ESA, currently available in Arizona and Florida, parents are able to direct 90 percent of the state per-pupil monies that would have followed their child to public school toward a variety of approved educational tools and services. That includes private tuition, tutoring, curricula, textbooks, individual public-school courses, college courses, online learning and education therapies. Parents can even roll-over unused funds into a college savings account, giving them incentive to seek maximum value for dollars spent on their child’s education.

Acting like an education debit card, ESAs empower parents to create an educational experience à la carte for their child. This ability to separate the financing of education from the delivery of services has the potential to change the entire landscape of educational options, fostering a supply side response that will continue to bring new education content providers into the market.

“We found that with the Empowerment Scholarship Account we have choices on where we can actually take our son. There weren’t those opportunities before,” said Katherine Visser, mother of 10-year-old ESA recipient Jordan. “With the ESA I have been able to completely customize Jordan’s education to what works best for him.”

ESAs are “the iPhone” of the school choice movement, says Dr. Matthew Ladner, senior fellow at the Foundation for Excellence in Education. “Charter and voucher programs were the rotary telephones of our movement.” They introduced a mechanism to choose private schooling options with public funds. “We are heading in the direction of iPhone choice programs— they still do that one thing well, but they also do a lot of other things.” Like allow parents to fully customize their child’s educational experience.

Despite their innovative approach, ESAs, like most other school choice measures, are currently available to a limited population of students within states that have them. While this is a good starting point, it’s only the beginning of offering options.

In their seminal work “Free to Choose,” the founders of the school choice movement, Milton and Rose Friedman, advocated for a public education system of universal school choice. At the time, they envisioned a robust K-12 voucher system that “would give parents at all income levels freedom to choose the schools their children attend.” The Friedmans also considered “partial vouchers” which would allow each student to spend part of a voucher at one place, and part of the voucher at another. ESAs thus represent a critical refinement of the Friedmans’ original voucher idea.

Although significant progress has been made on school choice over the past decade, certain roadblocks remain. As Lindsey Burke and Jarrett Stepman write in the Journal of School Choice:

Though school choice has proven to be popular, barriers remain in some states as a result of so-called Blaine amendments and similar policies to prevent education funding from following students to religious schools of choice as part of school choice options. If left to stand, these ignoble 19th century amendments will remain major impediments to the growth of school choice, and will be the battleground on which proponents and opponents of education reform spar in coming years. The U.S. Supreme Court has overruled the logic behind the amendments and disavowed their ‘shameful pedigree’.

Writing in National Affairs, Burke, along with Cato Institute’s Jason Bedrick, note that:

Where ESAs entail the allocation of public funds, they may not withstand scrutiny in states where courts have adopted very restrictive interpretations of the Blaine amendment. Nevertheless, the example of Arizona is encouraging on this point for advocates of ESAs. Despite having previously struck down vouchers, in March 2014 the Arizona Supreme Court declined to review an appeals-court decision upholding the state’s ESA law. The court distinguished the ESAs from vouchers because the latter ‘set aside state money to allow students to attend private schools’ whereas under the ESA law, ‘the state deposits funds into an account from which parents may draw to purchase a wide range of services” and “none of the ESA funds are pre-ordained for a particular destination’.

In states with particularly restrictive Blaine language, “policymakers could avoid the constitutional uncertainty altogether by funding the ESAs privately, through tax credits, rather than through government allocation,” they conclude.

This year’s celebration of National School Choice Week included a record number of events and millions of Americans’ involvement. As of 2015, 41 private school choice programs are operating in 24 states and the District of Columbia. Louisiana Gov. Bobby Jindal— who intervened in the Obama administration’s attempts to end the successful Louisiana Scholarship Program in 2013— called school choice week “freedom week.” He’s right. Parental choice in education is part of the foundation of the American Dream.