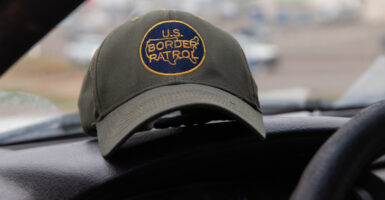 “Honestly, he should be ashamed of himself,” Border Patrol union leader Chris Cabrera says of Homeland Security Secretary Alejandro Mayorkas. Pictured: A cap with the Border Patrol logo sits on the dashboard of a U.S. Customs and Border Protection vehicle in McAllen, Texas, on Jan. 15, 2019. (Photo: Suzanne Cordeiro//AFP/Getty Images)

McALLEN, Texas—President Joe Biden and his homeland security chief have pushed policies that have made life easier for cartels smuggling drugs and illegal immigrants across the southern border, a top Border Patrol agent in Texas says.

Chris Cabrera, who is also spokesman for the National Border Patrol Council Local 3307, helps patrol the Rio Grande Valley, which is among the most overwhelmed areas near the southern border.

Cabrera says he is withholding judgment on whether Homeland Security Secretary Alejandro Mayorkas should be impeached over the border crisis, but does say Mayorkas “should be ashamed.”

The Biden administration reversed many of the Trump administration’s border security policies by halting deportations, stopping construction of the border wall, and ending the “Remain in Mexico” policy requiring asylum-seekers to make their claims from the other side of the border until they may be adjudicated.

“It has made [the cartels’] job a whole lot easier,” Cabrera said in response to a question from The Daily Signal, as he spoke to a group visiting the southern border as part of a tour organized by the Center for Immigration Studies, a think tank that advocates strict enforcement of immigration law.

Late last month, Mayorks released a “comprehensive” plan that he touted for having “six pillars,” including surging resources to the border, working with charitable organizations, and targeting human smugglers.

“Secretary Mayorkas testified and laid out six very specific pillars of effort and work that we would be pursuing, and some of that would be working directly with countries in terms of addressing root causes, addressing actions or attempts by smugglers to take advantage of this moment, and working with the Mexican government as part of that,” Psaki said.

Someone in the tour group asked Cabrera whether the union has or would take a stand on a potential Mayorkas impeachment, which Republican lawmakers have talked about on Capitol Hill.

“I don’t think they have,” he responded, adding that the union doesn’t approve of the job Mayorkas is doing.

“Honestly, he should be ashamed of himself,” Cabrera said of Biden’s homeland security secretary. “In private, he says one thing; in public, he says another.”

Privately, he said, Mayorkas would tell Border Patrol agents that “he’ll fight for us and do everything he can, he’s working on our behalf.”

But then, the union spokesman said, “he goes out in public and calls us racists.”

“I think he’s just a yes man,” Cabrera said of Mayorkas. “He’s going to say what they tell him to say.”

The Border Patrol station in McAllen is among the largest in the nation, with more than 600 assigned agents compared with about 40 at most stations, Cabrera said.

This situation has taken a toll on the town of McAllen and the Rio Grande Valley as far as economic development goes, the union spokesman said.

“It’s not a bad place to live, but find any other metropolitan area that has a major body of water—a river, a lake, an ocean—that doesn’t have million-dollar houses,” Cabrera told the tour group. “I know one, and it’s right here.”

He also criticized the administration’s investigation of Border Patrol agents in Del Rio, Texas, who Biden on Sept. 24 publicly accused of having “strapped” illegal immigrants from Haiti who were trying to cross the Rio Grande.

“I think it’s complete and utter nonsense,” Cabrera said of the investigation when asked about it, adding:

You have two different types of ways of riding a horse. You have Western riding, like what you see down here. And you have those guys with little black hats. … I guess they do English riding. Down here, you use those reins to control where the horse is going.

The investigation by the Department of Homeland Security’s Office of Inspector General cleared the agents, but the resulting report still hasn’t been made public, he noted. From the beginning, a photographer who took photos of the episode said agents weren’t using whips.

“Any time the Border Patrol does anything, it’s looked at with a microscope,” Cabrera said.

The agents involved in the September incident are allowed into the field, but not on horseback, the union spokesman said. He said he expects the report will be released eventually, and that the agents were treated unfairly.

“These guys didn’t have a prayer because … the president comes out and says, ‘You’re going to pay’ and the secretary says, ‘Hey, you were wrong,’” Cabrera said.