A Critical Look at Critical Race Theory in America’s Classrooms 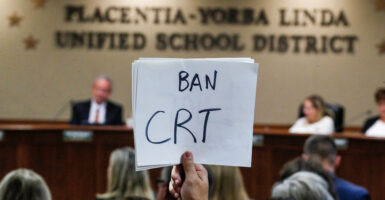 The Heritage Foundation invited 13 scholars to contribute to “The Critical Classroom,” which uncovers the often surreptitious application of critical race theory and analyzes its effects on teachers and students. Pictured: A parent hoists a sign Nov. 16 as California's Placentia-Yorba Linda Board of Education discusses a proposed resolution to ban teaching critical race theory. (Photo: Robert Gauthier/Los Angeles Times/Getty Images)

“There is little to no evidence that critical race theory itself is being taught to K-12 public school students,” The Associated Press wrote recently.

If that’s true, why would the National Education Association, the nation’s largest teachers union, invest in a campaign to keep the theory in K-12 instruction? That is, how could the union keep critical race theory in classrooms if it wasn’t there in the first place?

The answer is simple: School officials around the country not only are teaching critical race theory’s components, such as “intersectionality,” to K-12 children. They also are applying the theory’s principle that discrimination is appropriate and necessary for school activities in the form of mandatory racial affinity groups. For example, where students are separated by skin color for different school functions.

Racial prejudice left a shameful mark on America’s past, but contrary to what critical race theorists believe, racism does not define America. And racial discrimination has no place in law or culture today.

The Heritage Foundation invited 13 scholars to contribute to “The Critical Classroom,” a volume that uncovers the often surreptitious application of critical race theory and analyzes the effects that such a biased theory has on teachers and students alike. (The Daily Signal is the news outlet of The Heritage Foundation.)

“The Critical Classroom” traces the origins of critical race theory and explains that racist institutions, such as slavery and Jim Crow laws, violated our nation’s ideals—and adds that America is not systemically racist.

Yet radical activists who aim to keep critical race theory in schools want students to believe that America’s laws and cultural institutions are beyond repair.

As Heritage’s Mike Gonzalez writes in the opening chapter of “The Critical Classroom”:

If, from the start, one teaches the young population that the system of beliefs of their parents and grandparents has produced an oppressive conceptual superstructure, and that they must begin de novo, then one can change society’s blueprint in a generation or two.

Instead, students should be taught lessons about the entrepreneurship of black Americans even during periods of racial discrimination, as University of Texas professor John Sibley Butler explains in the volume.

Those lessons frequently are overlooked, Butler says, “because [research on race and entrepreneurship] focuses on economic and educational success, concentrating on what groups can accomplish, rather than what they cannot accomplish.”

Those are not the lessons critical race theorists want children to know. As I write in a chapter with Heritage legal fellow Sarah Parshall Perry, theorists contend that civil rights progressed in the U.S. only because white individuals were trying to maintain their power.

Such arguments undermine the behaviors and habits that contribute to human flourishing, such as personal responsibility and “agency,” as American Enterprise Institute scholar Ian Rowe explains in his chapter.

Other contributors to our volume explain that critical race theory’s ideology corrupts school instruction and operating policies. The theory eclipses efforts to give every child a great education with race-based quotas for school discipline policies (from a chapter by Max Eden, an American Enterprise Institute fellow) and even distorts the teaching of math and the hard sciences (from Williamson Evers and Ze’ev Wurman of the Independent Institute).

Once parents and voters are informed about critical race theory’s core ideas, surveys find they strongly reject that worldview.

In his chapter reviewing surveys and polling on public opinion regarding critical race theory, Adam Kissel writes, “Parents … want their children to love American for the right reasons—to appreciate its truly amazing successes, while seeing its blemishes honestly.”

Kissel adds: “They see [critical race theory] advocates teaching children vice in the name of virtue, and they have had enough.”

That sounds simple enough, but the complex mingling of “critical” ideas with K-12 instructional materials deserves an equally sophisticated response.

State lawmakers should consider proposals that reject compelled speech because critical race theorists consider coercion to be a feature, not a bug, of their worldview.

Legislators also should consider requiring school officials to post teaching content online, so that parents can see what educators are teaching their children. (Disturbingly, some schools are hiding content from parents.)

The volume outlines how critical race theory has permeated colleges of education, creating a sense of urgency for alternative teacher-certification proposals. Other solutions, including school choice and limiting federal higher education subsidies, are smart policies anytime.

The aim of “The Critical Classroom” is to help lawmakers, educators, and parents as they guide students and schools away from bigotry and to the promise that America remains a country where freedom and opportunity are available to all, regardless of skin color.