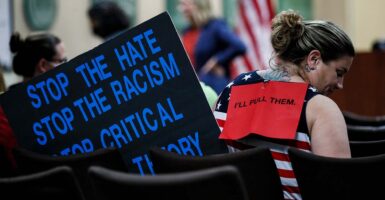 In its announcement to tech companies, the union couched its bigoted worldview as benign, claiming critical race theory is spread not at the K-12 level, but through “graduate level courses about racism.”

Yet last summer, the National Education Association adopted a resolution rededicating itself to pushing critical race theory in classrooms. With its message to social media companies, the union advocates for the biased theory again, claiming “false information” against critical race theory has “spread like wildfire.”

In an ironic twist, the union claims that state proposals to reject critical race theory in K-12 classrooms amount to censorship.

If those activists disagree, they should take it up with critical race theorists Richard Delgado and Jean Stefancic. In 2001, they wrote, “Unlike some academic disciplines, critical race theory contains an activist dimension. It not only tries to understand our social situation, but to change it.”

Critical race theory is not merely for study—radicals want their wild-eyed idea that America is systemically racist, along with the belief that new acts of racial discrimination are necessary to counter former discrimination, to be concepts that define K-12 instruction.

Take the new math standards in California, where state Education Department officials said that math should be taught with a “focus on equity.” In completing their assignments, students should ask, “Who does this privilege?” and “Who is silenced?,” turning math into a lesson in social protest instead of a skill set that helps children succeed in school and in life.

If activists declare some people are “privileged” based on their skin color, the implication is that they should apologize for their immutable characteristics and face consequences because of their race. Some public school officials have separated students according to skin color for school activities, the subject of lawsuits in Colorado and Illinois, to name a few examples.

Educators are to push students into believing that every subject, including math, must be considered through the lens of racism. As explained in my forthcoming book “Splintered: Critical Race Theory and the Progressive War on Truth,” educators don’t have to use the words “critical race theory” to lace classroom instruction with the theory’s racially discriminatory ideas.

Outside of California, lawmakers are trying to protect teachers and children from discrimination by prohibiting compelled speech.

Lawmakers in Florida, Georgia, Indiana, Mississippi, and South Carolina are considering proposals that say no teacher or student should be compelled to affirm that someone is racist based only on skin color, in some cases reinforcing the Civil Rights Act of 1964. This seminal civil rights law says that no one should be “subjected” to discrimination, and that within schools, students should not be assigned to different activities based on race.

Most lawmakers have just returned to state capitols. Proposals should still be sharpened, but by prohibiting compelled speech, lawmakers give critics of such proposals no room to accuse lawmakers of trying to censor textbooks.

Some of the new proposals even require public school leaders to give taxpayers greater access to school curriculum so that parents can see what their children are learning. My book documents cases in which educators tried to hide classroom content from families so they would not know that students were being taught radical ideas that surveys show are widely unpopular with Americans.

A recent survey found that 81% of voters said public schools should teach the idea that “America was founded on the ideals of freedom, equality, and self-governance,” the opposite of critical race theory’s principle that American institutions will always be racist.

State lawmakers must protect teachers and students from the bigotry caused by critical race theory’s application in schools. These new proposals countering the theory’s dogma by blocking compelled speech recognize the theorists’ intent to not only describe a philosophy but to convince Americans, including children, to apply prejudicial ideas.

The truth about critical race theory is becoming more widely understood. State officials’ new proposed protections against the worldview see the theory’s application for what it is: racial discrimination.