State Lawmakers Are Combating Racism the Right Way. Here’s What You Need to Know. 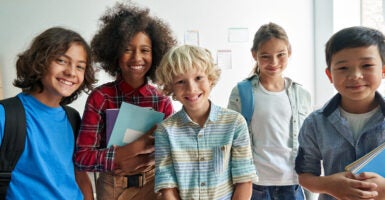 While there should always be room for healthy debate about what is taught in the classroom, one thing is clear: Teachers and students should never have their rights under the U.S. Constitution and the Civil Rights Act of 1964 violated. (Photos: insta_photos/Getty Images)

Every parent wants to protect their child from prejudice. Yet some activists and writers claim that state lawmakers’ proposals to reject educators’ use of critical race theory in K-12 schools is a “campaign” that “thrives on caricature.”

We saw an example of this in a Twitter exchange between the best-selling author Jordan Peterson and the Manhattan Institute Senior Fellow Chris Rufo this week.

Rufo, who has documented the ways in which educators’ application of critical race theory leads to racial discrimination, appropriately responded by saying state proposals that defend teachers and students from these activities must be “careful” to “restrict racialist abuse.” Schools have a “coercive power over children,” Rufo argued.

Also, critical race theory can be defined (its architects left a canon defining its main ideas) and lawmakers are responsible for addressing violations of existing law. The Heritage Foundation’s model policy contains such careful provisions and prohibits compelled speech—with compelled speech being a natural consequence of school officials’ applications of critical race theory in classrooms (or anywhere else).

As I explain in my book “Splintered: Critical Race Theory and the Progressive War on Truth,” critical race theory promotes racial discrimination and Marxism. One critical race theorist called Karl Marx’s ideas “dazzling” and “riveting to contemporary theorists.” Critical race theory has an “activist dimension” and “questions the very foundations of … constitutional law,” according to two of the theory’s founders, Richard Delgado and Jean Stefancic.

There is a wave of popular opinion rejecting the theory’s biased applications. State lawmakers are considering proposals that defend teachers and students from being forced to believe ideas that clash with their personal values and America’s founding ideals, including ideas that violate the Civil Rights Act of 1964. Here are some examples of proposals that are rejecting racial discrimination, not “banning critical race theory”:

Critics have claimed such proposals prevent schools from “making people feel ‘discomfort,’” as though teachers will need to avoid discussing the harsh truths about slavery and racism in America’s past. But the proposals are specific regarding school activities and instructional practices and do not “ban black history,” as one Florida lawmaker who opposes the state proposal claimed.

Florida’s proposal, for example, says that a public employee cannot force a teacher or student “to believe” that an individual should “feel discomfort, guilt, anguish” based on their skin color. The proposal is not an invitation to censor school material but a firm statement opposing racism.

Some school officials know that racially discriminatory behavior will not stand in court. Earlier this week in Massachusetts, Wellesley public school leaders just settled a lawsuit with Parents Defending Education, an advocacy organization exposing radical content in schools, who argued that the district’s racial affinity groups were illegal. These “affinity” activities separate students by race for different school activities.

State proposals to reject critical race theory should protect teachers and students from prejudice by prohibiting compelled speech, reinforcing the Civil Rights Act of 1964 and the 14th Amendment to the U.S. Constitution, and even stating that nothing in such proposals shall limit classroom discussions (Georgia’s proposal, for one, contains such a provision).

Before denouncing state proposals for using the words “discomfort, guilt, and anguish” in relation to K-12 schools, critics should look closer at what lawmakers are attempting to do: protect children from racism.