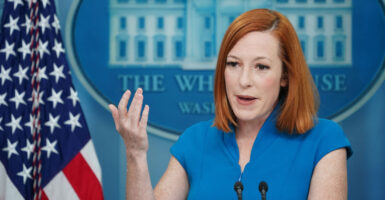 White House press secretary Jen Psaki—seen here at the daily press briefing on Wednesday—has insisted, albeit without evidence, that the current high rate of inflation is "temporary" and "transitory." (Photo: Mandel Ngan/AFP/Getty Images)

Economic freedom in the United States is on a perilous journey.

The main culprit for the decline in this year’s index was astronomical deficit spending in the wake of COVID-19, to the tune of 15% of gross domestic product in 2020.

That’s bad enough, but now the twin threat of four-decade-high inflation buffets the economic freedom of the people of the United States with no apparent end in sight.

White House press secretary Jen Psaki has been downplaying the effects of the diminishing spending power of Americans in this new high-inflation era, which is reminiscent of 1970s-era stagflation (that is, stagnant economic growth combined with high inflation).

Psaki famously sniped that a shortage of goods reaching shelves in time for Christmas was “the tragedy of the treadmill,” insinuating that only people looking for luxury items, such as treadmills, might be hurt.

Scarcity contributes to inflation because people pay more for things when there are fewer of the things they want to buy to go around. Psaki as recently as last month was telling the White House press corps that inflation was predicted to be “temporary.”

So, don’t worry? There’s “nothing to see here,” apparently, so move along now. Don’t mind your lighter wallet or the sky-high bills you are paying. It’s only temporary.

March’s 8.5% year-over-year rate of inflation announced Tuesday is the highest since 1981. Food prices year-over-year are even higher, up 8.8% since March of last year. The cost of energy is up 32%—including gasoline, up 48%.

Claiming it’s temporary or “transitory,” as has been redundantly stated over the past 12 months as inflation marched higher, doesn’t put money back into people’s checking accounts.

Meanwhile, another alarming piece of data released Tuesday has been overshadowed by the government data on inflation.

The National Federation of Independent Business’ Research Center—which has collected small business economic trends data with quarterly surveys since the fourth quarter of 1973 and monthly surveys since 1986—released its March survey, and business owners “expecting better business conditions over the next six months decreased 14 points to a net negative 49%, the lowest level recorded in the 48-year-old survey.”

Inflation has now replaced “labor quality” as the No. 1 problem, according to business owners surveyed by the National Federation of Independent Business in March, and concerns about it are the highest since 1981.

None of this bodes well for economic freedom in America.

A year ago, in March 2021, year-over-year inflation stood at 2.6%, which was then the largest year-over-year increase since August 2018, but still a far cry from last month’s one-year-later 8.5% number released Tuesday.

Monetary freedom is one of the 12 components of economic freedom in Heritage’s index, and it’s primarily determined by inflation.

High inflation—and thus low monetary freedom—is the top concern of business owners in the National Federation of Independent Business survey for good reason. No customer wants to pay more for things businesses sell, and some will cut back when inflation rears its ugly head.

Inflation hurts businesses by shrinking the value of the money they have to invest in their companies and produce their products. It also makes it hard for business owners to plan for the future if the value of a dollar a month—or a year, or two years—from now is unknowable.

Those are just some of the reasons why a stable currency—and, therefore, monetary freedom—is key to economic freedom in Heritage’s Index of Economic Freedom. And there’s no need to single out treadmills.