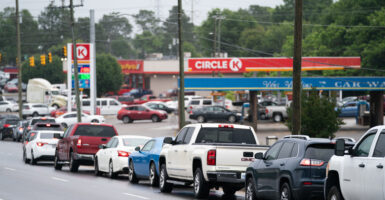 Motorists wait in line to fill up at a Circle K gas station on Wednesday in Fayetteville, North Carolina, following the cyberattack on the Colonial Pipeline. The economic impact of the hack dramatized the need for repeal of the Jones Act. (Photo: Sean Rayford/Getty Images)

The Eastern European or Russian hacking ring DarkSide’s cyberattack has wreaked havoc on the Colonial Pipeline, which transports a large percentage of the gasoline, jet fuel, and other refined petroleum into several states throughout the southeastern U.S. and mid-Atlantic.

News of the pipeline’s shutdown sparked a panic-fueled run on gasoline, and caused gas prices to spike and many filling stations to run out of gas in Georgia, North Carolina, South Carolina, Virginia, and other states, and in Washington, D.C.

In response, the Biden administration has granted a waiver to a century-old law to allow one company to transport oil products between the Gulf Coast and East Coast ports until the Colonial Pipeline supply problems are remedied.

The law President Joe Biden waived is the Merchant Marine Act of 1920, also known as the Jones Act. But Biden’s waiver raises the question: If waiving the Jones Act facilitates domestic trade in a time of crisis, why restrict transport of legal and beneficial goods anytime?

The law is intended to protect U.S. shipbuilders from competition, but it imposes steep costs on Americans.

For example, shipping oil to the Northeast from Texas under the Jones Act costs three times as much as shipping oil there from Africa—a difference no one would pay voluntarily. Because it’s so expensive to use Jones Act-compliant ships between two U.S. ports, goods are often not transported that way.

Goods can also be transported by trucks and rail, but that comes with its own trade-offs, such as air pollution and wear and tear on U.S. highways. In the case of transporting oil, it’s less cost-effective than if moved by ship or pipeline.

Even as the Jones Act has raised costs reverberating through the economy for Americans, it has also failed in its original objectives of enhancing national security and maintaining shipbuilding capacity for the military.

In times of war since 1990, foreign-flagged commercial ships carried twice as much equipment as U.S. vessels. More than 300 U.S. shipyards have gone out of business since 1983. Building a U.S.-flagged ship costs as much as eight times as much as it costs foreign counterparts, and U.S. shipbuilding is less than 1% the size of the shipbuilding industries in China or South Korea as a result.

Besides reducing barriers to more efficient oil supply, there could be additional benefits to repealing the Jones Act.

For example, the Jones Act unnecessarily complicates the process of, and increases the cost of, siting offshore wind projects.

The U.S. is facing a new era of high inflation now, and repealing the Jones Act would mitigate that threat to the economy by lowering the embedded transportation costs of goods that are sold in the United States.

The Colonial Pipeline cyberattack is a clear example of why the Jones Act should be repealed. It’s time to relegate the problematic law to history’s dustbin so that it no longer threatens America’s national security and the well-being of all Americans.