Captive to Captagon: How This Narcotic Became Scourge of Middle East 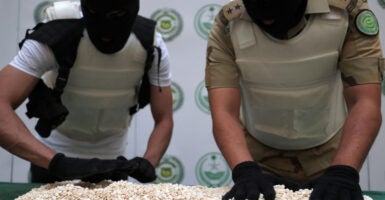 In the coastal city of Jiddah, Saudi Arabia, on March 1, officers of the Directorate of Narcotics Control of Saudi Arabia's Interior Ministry display for the media Captagon (fenethylline) tablets seized during a special operation. (Photo: Fayez Nureldine/AFP/ Getty Images)

Captagon sounds like the name of a substance from a science fiction novel.

Originally compounded as a pill to combat narcolepsy and attention-deficit/hyperactivity disorder, captagon (generically known as fenethylline) is a narcotic substance that was banned in the 1980s but has exploded in popularity throughout the Middle East.

The $5 billion captagon drug trade is directly funding the illicit activities of the Assad regime in Syria and Hezbollah in Lebanon.

Captagon is turning Syria into a narco-state. According to the Cyprus-based Center for Operational Analysis and Research, authorities outside Syria seized a combined total of at least $3.4 billion worth of captagon in 2020 alone.

It’s difficult to identify how much of the total revenue the Assad regime benefits from, but one thing is clear: Captagon is as lucrative as it is dangerous.

The drug empire is run by businessmen tied to the Assad regime, close associates of Syrian strongman Bashar Assad, and even family members. Mahar Assad, the younger brother of Assad, and Maj. Gen. Ghassan Bilal both use elite forces from the 4th Division of the Syrian army to protect factories and ensure safe passage of the drug within Syria and across Syria’s borders.

Syria, however, is not alone in exporting the highly addictive drug. Nefarious actors such as the Islamic State and Hezbollah are also producing or smuggling captagon to clients in the Arab Gulf region and to Europe to finance terrorism.

A 2020 shipment with a street value of 1.6 billion euros was seized in Italy. It was thought to have been produced in Syria by the Assad regime and Lebanese Hezbollah.

The pills are commonly smuggled mixed in with produce, tea bags, and clothing shipments. In May 2020, Saudi authorities found hollowed out pomegranates with pills hidden inside. The drug bust was one of the six by Saudi Arabia every month.

Captagon is also destabilizing other U.S. partners that border Syria and Lebanon. Jordan has found itself in the unfortunate position of being a major crossing point to smuggle captagon from Syria to the Arab Gulf.

In January, 27 Syrian drug smugglers were killed by Jordanian border forces in a shootout when the smugglers sought to enter the kingdom.

This isn’t the first drug-smuggling incident for Jordanian border guards. Since 2020, Jordan has reported a number of clashes with smugglers who are becoming increasingly sophisticated, employing drone technology to avoid border crossings and utilizing various armed groups to ensure safe passage.

As such, the captagon drug trade is a major security concern for Jordan, but it also has had a significant impact on communities whose proximity to drug-smuggling routes allow for easier access.

Statistics are scarce, but officials in Jordan and Iraq have warned that the number of cases of drug addiction are on the rise, particularly among Arab youths.

Current users of captagon range from young adults wanting to dance the night away at an underground electronic music festival to soldiers fighting for the Islamic State.

There is, however, another subset of the population that is using captagon alongside other drugs, such as khat and cannabis, to cope with the growing class divide and deteriorating socioeconomic conditions.

Regardless of the motivation, increased consumption levels of captagon among young Arabs will have a lasting impact on the region that is already struggling from a decade of economic instability worsened by the Syrian civil war and the COVID-19 pandemic.

The opioid epidemic in the United States has cost the lives of nearly 1 million Americans since the late 1990s. Many users who develop a tolerance find their fix with more dangerous substances. That same phenomenon could occur in the Middle East if nothing is done.

The region has experienced many challenges since the Arab Spring in 2010, but it is now at a vulnerable point.

Russia’s war on Ukraine has caused a significant rise in wheat prices across the region. Bread is a staple food item in the Middle East, so any significant price spikes can trigger political instability. In 2011, high bread prices were one of the many grievances cited by anti-regime protesters during the Arab Spring.

A widespread drug epidemic would only fuel instability by empowering bad actors while hurting local populations that are trying to recover from the social, political, and economic impact of COVID-19.

Members of Congress have introduced bipartisan legislation to help combat the rise of Assad’s narcotics trafficking, but the legislation is only the first step.

The U.S. must continue to monitor and address the growing illicit drug trade in Syria and Lebanon because it is funding groups that actively threaten U.S. interests and partners in the Middle East.

For more information on related topics:

Putin Weaponizes Refugees in Ukraine, Just as He Did in Syria

How the United States Should Approach Normalization Efforts With Syria