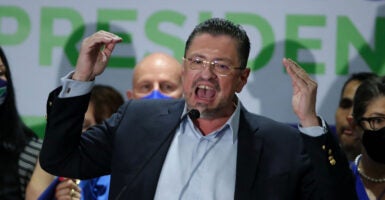 Costa Rican President-elect Rodrigo Chaves—seen here speaking at his campaign headquarters on election night in San Jose on Feb. 6—will face daunting challenges when he takes office on May 8. (Photo: Randall Campos/AFP/Getty Images) 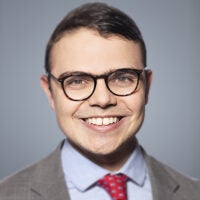 Costa Ricans have elected a new president, Rodrigo Chaves, who will take office May 8 to succeed Carlos Alvarado.

Here’s what you need to know about Chaves and his priorities, and how they might affect U.S.-Costa Rican relations.

Q: Who is Chaves, and can you give us a brief sketch of the election?

A: Chaves, 60, is an economist and former World Bank career official who was unknown to the majority of Costa Ricans until serving a 180-day stint as finance minister and gaining the support of journalist Pilar Cisneros during the election campaign.

A political newcomer, Chaves rode to victory largely on a wave of anti-establishment sentiment.

The election marked the lowest general election turnout in six decades during the first round in February. It also marked the third consecutive election since 2014 in which Costa Rica’s two traditional parties did not claim victory.

Voters were turned off by scandals in both campaigns—decadesold accusations of graft against Figueres and a sexual harassment allegation against Chaves by two World Bank employees in 2019.

Chaves’ victory was marked by wide support in the country’s poorest regions and by high abstention. The election was also devoid of a far-left populist wave, which has captured other Latin American electorates, to the credit of Central America’s oldest and most stable democracy.

Q: What challenges await the new president and what can we expect from him?

A: The election was a clear indication of voter apathy toward government corruption and poor economic performance, including the largest contraction of gross domestic product in four decades in 2020, which Costa Rica has yet to fully recover from.

Some 50,000 more Costa Rican families are in poverty since the start of the COVID-19 pandemic, or roughly 23% of the population. Unemployment is nearing 15%, one of the highest rates in Latin America.

The new president will encounter a bloated and inefficient state, with a public payroll that consumes more than half of its revenue and regulatory hurdles that raise the cost of living and hinder investment.

The new president will have to deal with the sixth-largest fiscal deficit rate in Latin America and an agreement in place with the International Monetary Fund over a $1.7 billion loan.

Chaves has promised a pro-market agenda by reducing bureaucracy and regulations, using decree power to reduce costs of basic household goods through a combination of measures, and implementing anti-corruption efforts.

Q: Are there hurdles that we can expect to implementing an ambitious agenda?

A: Chaves arrives with heightened expectations to accelerate growth and combat corruption, but without established congressional support. His Social Democratic Progress Party won just 10 of the total 57 seats in the unicameral legislative assembly, second to Figueres’ National Liberation Party, which won a plurality with 19 seats.

Chaves will have to build a broader coalition, potentially including sectors within the National Liberation Party and other more socially conservative parties. Coalitions will likely vary, depending on the issue.

But Chaves’ campaign promises to use decree powers or popular referendums on key reforms have raised accusations of populism and unconstitutionality.

On key issues, such as pensions, the president is required constitutionally to consult with the legislature.

Chaves is likely to pursue legal or electoral avenues to facilitate the use of these instruments to bargain with the legislature for speedy reforms. The added hurdles of relatively weak executive powers and a fragmented legislature have slowed past reforms and may prove Chaves’ greatest challenge.

Q: Are there implications for U.S.-Costa Rica relations? Why should Americans pay attention?

A: Costa Rica is an example for stability and democracy in the region.

On migration, trade, and counternarcotics efforts, there are ample opportunities to build on U.S. cooperation, including a $50 million security and justice aid package in 2020.

Costa Rica shares a nearly 200-mile border with Nicaragua and has received a mass exodus fleeing the dictatorship. This is a shared challenge with more than 87,000 Nicaraguans reportedly crossing the U.S. southern border in 2021.

Costa Rica recently joined Panama and the Dominican Republic to forge the Alliance for Development in Democracy. The U.S. should engage the alliance to curb migration flows, strengthen economic freedom and property rights to enhance investment, and elevate strategic challenges, such as hard infrastructure and the targeting of money laundering and other illicit finance.

China’s growing role in the region also goes by way of Costa Rica, the first Central American nation to recognize Beijing in 2007. Chaves has indicated a growing interest in expanding ties with China, which the U.S. should monitor closely.

Existing areas of collaboration and Costa Rica’s expressed interest in engaging the U.S. through the alliance are also an opportunity to identify areas to strategically counter Beijing and to offer economic and security alternatives.