The Crisis in Nicaragua, Explained 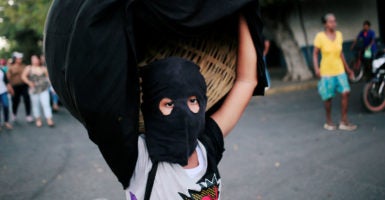 A masked child takes part in a march in support of the Catholic Church in Leon, Nicaragua, on July 28. (Photo: Oswaldo Rivas/Reuters/Newscom)

Listen above to the full podcast, which features an interview with Ana Quintana on Nicaragua’s crisis and a discussion of a news article that casts a dark shadow on Catholic hospitals in rural areas, or read the lightly edited transcript of the interview with Quintana below.

Daniel Davis: Is Nicaragua becoming the new Venezuela? In recent months the small Central American country has descended into violence and political turmoil as the nation’s dictator Daniel Ortega holds onto power. Here with us to break down the worsening crisis is Ana Quintana, she’s a senior policy analyst here at The Heritage Foundation. Thanks for joining us, Ana.

Ana Quintana: Hey, thanks for having me.

Davis: So, Ana, Nicaragua is a small country, not exactly on the radar for a lot of folks. Can you give us just a brief sketch of Nicaragua and what it’s been through in recent months?

Quintana: Yeah. So since April, there have been these massive anti-government protests. Initially it started because the government was trying to pass a really unpopular social security reform. The government has essentially plundered the social security system for its own abuses. I mean they just—they use government money for their own purposes. And the country system is … it’s been depleted.

So initially it was about the social security reforms. Now it’s essentially about the future of the Ortega regime. And I think it’s incredibly appropriate how you call him a dictator because that’s what he’s become.

Davis: So I guess part of the reason I’m calling him that is, a lot of folks internationally have said that he’s rigged elections. Is that a fair allegation?

Quintana: Oh, of course. For the last … he’s been in power on and off for about 22 years out of the past 40 years. So initially he was this revolutionary insurgent leader, insurgency leader in the ’70s and during the civil war. It was a Soviet-backed leader, keep that in mind. So he was a Marxist Soviet-backed leader.

He then won the elections after the civil war ended and now in these previous, these last three elections, he’s little by little kind of chipped away at the constitution and kind of making sure that he wins the election. And last time around, he appointed his wife as his vice president, completely unconstitutional, but he controls the supreme court so he was able to get away with it.

Trinko: So the Trump administration issued a very lengthy statement on Monday, discussing the situation and condemning it. They also said that they were going to take sanctions against three Nicaraguan officials—Francesco Diaz, Fidel Moreno, and Francesco Lopez. Do you think these things will have an impact and what does that even mean, to sanction an individual?

Quintana: Yeah, so I think these specific targeted sanctions—we’ve seen in the case of Venezuela that they are incredibly powerful. So the Trump administration is sanctioning these Nicaraguan officials under what’s called the Global Magnitsky Act, which was named after the famous Russian dissident who was killed by Vladimir Putin.

Davis: So every week there are some new reports that trickle in and more people being killed. I don’t know what it’s up to now. Two hundred or 300 officially reported, but human rights folks are saying it’s more. You mentioned before the show here that they’ve been targeting the Catholic Church recently and the Catholic Church had been trying to broker some kind of peace. Why would the government now go after the Catholic Church, which most Nicaraguans would say that they are a part of?

Quintana: Yeah. So the number right now is, officially, it’s at 300. The belief, though from folks that I know in Nicaragua, is that the number is higher than 400. And there are about 800 people who have been disappeared. Nobody knows where they’re at. Nobody knows if they’re in government custody, no one knows if they are in police custody. But the common perception is that they’ve been forcibly disappeared and they’re dead.

So the Catholic Church is … they’re playing a very neutral role in this. They wanted to diffuse the crisis. They want to lead this national dialogue between the opposition parties and the government, but the government is not having that. They are not supportive of what the church is doing because anything that challenges their power, their role of staying in power, is a threat to them.

Last week I met with the priest who was featured in The Washington Post story about that church that was under siege for 15 hours. So for 15 hours you had the police and you have these paramilitaries attacking a church, shooting live fire. Thousands of rounds of bullets in a time span of 15 hours. I think two students ended up being murdered.

Students were fleeing into the church to kind of try to protect themselves and this priest the entire time, he just prayed and kept his people safe. And I mean, thank God he’s fine. But he left. He was in D.C. for a few days for the ministerial [on religious freedom]. He’s heading back—well, he actually arrived back this weekend and God knows if he’s going to survive. I mean he’s really … it’s an incredibly delicate situation for him.

Davis: So what exactly comes next? We’ve heard talk in the U.S. Congress for a while about a bill called the NICA Act …  tell us about that and what it would do.

Quintana: Yeah. So the NICA … [is] a bill that’s been floated around for the past few years and what it stands for is the Nicaragua Investment Conditionality Act. So what it would specifically do is that it would ask the United States in any international financial institution that we’re a part of, whether it’s the IMF, the International Monetary Fund, the World Bank, the Inter-American Development Bank, to veto any loans to the Nicaraguan government.

Because what’s been happening is that the Nicaraguan private sector has long propped up this regime. The Nicaraguan private sector comes up to D.C., they lobby members of Congress and claim that, hey, you know, Nicaragua where everything’s good, Nicaragua’s relatively peaceful, Nicaragua is not a source of illegal immigration to the United States. So, you know, kind of let the government do its own thing. If it wants to become authoritarian, hey, let them be authoritarian, but now we’re seeing that the early warning indicators were there, right?

Just the same way like how we saw it in Venezuela where you had a private sector that was acquiescing to this authoritarian regime and now the private sector seems like they’re turning against the government. That’s the next thing. This facade that they’re trying to play. But I think bills like the NICA Act, things that withhold U.S. taxpayer funds from propping up this government, I think are things that should be considered.

Trinko: So what do you think the way forward is for Nicaragua? I mean, is the hope that their elections are held and Ortega is toppled? Or what does it look like?

I think at this point right now, the U.S. government should rightfully continue supporting the dialogue. Because I think that needs to be the way forward.

We need to see a peaceful resolution to this, but at the same time we need to continue applying levers of pressure. The sanctions must continue. We also need to be asking other countries to reciprocate these sanctions as well. Because if their money in Mexico, for example, is also frozen, that can be helpful.

If their money in Panama, which is a money-laundering haven, is frozen, again, that can be helpful and I think the region really needs to isolate Nicaragua right now because they don’t want to see another Venezuela on their hands. Venezuela’s already going to be a multibillion-dollar project to rebuild. That can potentially happen with Nicaragua.

Trinko: Is there any hope for the opposition to get stronger or is … trying to get the government to behave better … the most realistic hope?

Quintana: I think right now is, I think the … an opposition leader will emerge from all of this. In moments of crises, that’s what tends to happen. And it can’t be the United States saying, “Hey, this guy is Americanized and he’s cool. He should take over.” I think it’s the Nicaraguans themselves are going to decide.

I think the majority of the people in the country are tired of this government. I think you’ve seen that the protests cross all sectors, whether it’s peasants, students, members of the Nicaraguan elite—everybody’s against the government right now. And I think that’s incredible. And somehow in all of this, a leader will emerge.

Davis: Well, it’s a sad situation unfolding, but we’ve seen more interest from Washington and we hope that’ll keep building. So thanks, Ana, for coming in and explaining for us.

Quintana: Oh, of course, thanks.