The Left Strikes Again at Freedom of Speech in Akron, Ohio 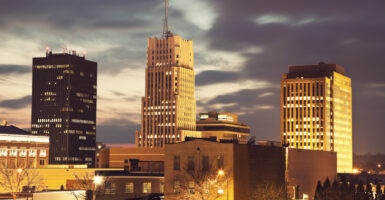 The left tried to censor a voice it doesn't agree with at the Akron Roundtable of Ohio. Pictured: Downtown Akron, Ohio, at sunset. (Photo: Henryk Sadura/Getty Images)

Recently, the Akron Roundtable of Ohio invited me to give a presentation on the issue of election integrity as part of a recurring series it calls “Point/Counterpoint.”

As I told the audience, the sponsors of the Roundtable, which includes the Kiwanis Club, the Greater Akron Chamber, and the Akron Beacon Journal, were to be applauded for upholding the great American tradition of having civil, even vigorous discussions on important issues from individuals with differing points of view, a tradition that has virtually disappeared in our communities and college campuses.

The progressive, radical left, however, has no interest in upholding this tradition, protected by the First Amendment, which is vital to a functioning democracy.

I experienced a shameful example of this before arriving in Akron: the League of Women Voters lodged a protest with the Roundtable for allowing me to speak. The minions of the left want to silence anyone who disagrees with them or questions what they assert is the only acceptable “truth.”

The Akron Roundtable is one of the diminishing number of organizations that is still committed to open and civil discourse. As its website says, it is dedicated to promoting “community dialog and networking by presenting speakers who inform and educate listeners on diverse topics of importance to the region, the nation and the world.”

True to that mission, the organization has invited guests as disparate as Sen. Sherrod Brown, D-Ohio; Center for Immigration Studies Director Mark Krikorian; and Paul Helmke of the Brady Center. I was just the latest speaker to join this long list of more than 400 guests who have spoken to the Akron Roundtable, which is made up of a very diverse group of individuals, many of whom have different points of views on everything from politics to culture.

The League of Women Voters took issue with the Roundtable inviting me to speak. Its local chapter president, Rosanne Winter, sent the Roundtable a letter expressing the group’s “strong disappointment,” and protesting my choice as a speaker. The Roundtable should select “respected speakers,” said the League, by which it clearly means only those who don’t disagree with the League.

Winter was upset that I actually talk about examples of election fraud in our country, which, as the Supreme Court itself said, has “been documented throughout this Nation’s history by respected journalists and historians.” Apparently, they believe that speaking about that, or telling the public about The Heritage Foundation’s Election Fraud Database, which is now up to 1,349 proven cases of fraud, should not be allowed in a public forum.

What is particularly ironic about this letter is that the League of Women Voters had already spoken to the Roundtable about this issue. Remember, this is a “Point/Counterpoint” series. I spoke on March 17, but in February, the members of the Roundtable heard from Jessica Jones Capparell, the director of government affairs for the League of Women Voters of the United States.

The League’s shameful protest graphically illustrates how much the League of Women Voters and too many others no longer believe in the First Amendment, and want to chill the speech of anyone who disagrees with them.

There was also a letter to the editor from Sherry McMillen that was published in the Akron Beacon Journal (approvingly cited by the League) protesting my being allowed to speak, saying that giving me a “platform” would be a “disservice to our community and our nation.” Apparently, Ms. McMillen believes that allowing anyone to speak who disagrees with her view of the world is a “disservice.”

She would have fit in very well in the countries my mother and father grew up in before they immigrated to the U.S. to get away from governments, societies, and cultures that did not allow dissent or countering views on the accepted political orthodoxy.

According to the League and the letter writer, they are the sole and unequivocal arbiters of truth and morality, so any dissent must be silenced for the common good.

Fortunately, the Akron Roundtable doesn’t agree. And neither do other citizens in Akron, like Robert E. Williams II, a Vietnam veteran who wrote his own letter to the editor criticizing such censorship efforts and those individuals who apparently believe that free speech is only “for those you agree with.”

I have no doubt there were individuals in the room who disagreed with my views and opinions. But they allowed me to speak and everyone there was extremely cordial, polite, and civil—which is the same way they treated the speaker from the League of Women Voters.

I vehemently disagree with the League’s uninformed views on election integrity, its dishonest claims of “voter suppression,” and its unfair attacks on efforts to reform the election process to improve its fairness and honesty. But the difference is that it would never occur to me to send a letter to the Roundtable protesting its choice of a speaker from the League.

As a first-generation American, I learned from my parents the importance of the First Amendment and of protecting the right to free speech, even of those whose opinions I think are totally wrong.

We should all welcome debates like those held by the Akron Roundtable that foster meaningful, cross-partisan discussions on the key issues of the day while condemning the authoritarian mentality of those who wish to silence their opponents at all costs.

Quoting from a recent opinion column, “Free speech demands a greater willingness to engage with ideas we dislike and greater self-restraint in the face of words that challenge and even unsettle us … [and] yet many progressives appear to have lost faith in that principle.” Who was the author of that damning line? The New York Times editorial board itself.