On Counterterrorism, Is Biden ‘Over the Horizon’ or in Over His Head? 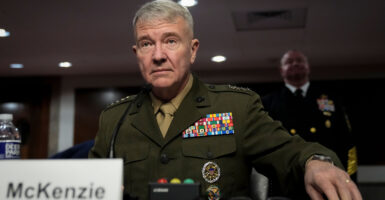 On April 14, 2021, President Joe Biden announced that, in keeping with an agreement former President Donald Trump had made with the Taliban, he would be removing all U.S. military forces from Afghanistan.

“We went to Afghanistan in 2001 to root out al-Qaeda, to prevent future terrorist attacks against the United States planned from Afghanistan,” Biden said. “Our objective was clear. The cause was just.”

“I believed that our presence in Afghanistan should be focused on the reason we went in the first place: to ensure Afghanistan would not be used as a base from which to attack our homeland again,” he said.

He was indisputably right about this. The ultimate reason for our intervention in Afghanistan was “to ensure Afghanistan would not be used as a base from which to attack our homeland again.”

Biden then assured Americans that his administration would work from “over the horizon” to make sure this was the case.

“But we’ll not take our eye off the terrorist threat,” he said. “We’ll reorganize our counterterrorism capabilities and the substantial assets in the region to prevent reemergence of terrorists, of the threat to our homeland from over the horizon.”

On Aug. 15, the Taliban seized Kabul.

On Aug. 26, an ISIS-Khorasan suicide bomber killed 13 U.S. troops and, according to the Congressional Research Service, “more than 150 Afghans” outside the Kabul airport.

“I am here to announce the completion of our withdrawal from Afghanistan and the end of the military mission to evacuate American citizens, third country nationals, and vulnerable Afghans,” said McKenzie. “The last C-17 lifted off from Hamid Karzai International Airport on Aug. 30, this afternoon, at 3:29 p.m. East Coast time and the last manned aircraft is now clearing the airspace above Afghanistan.”

The next day, Biden delivered another address from the White House.

“We will maintain the fight against terrorism in Afghanistan and other countries,” he said. “We just don’t need to fight a ground war to do it. We have what’s called over-the-horizon capabilities, which means we can strike terrorists and targets without American boots on the ground—or very few, if needed.”

So, did Biden order U.S. forces out of Afghanistan only after he had ensured that “Afghanistan would not be used as a base from which to attack our homeland again”?

Is he keeping America safe from Afghanistan-based terrorists?

In February, the Office of the Director of National Intelligence released the 2022 “Annual Threat Assessment of the U.S. Intelligence Community.”

It made some observations about Afghanistan and ISIS.

“The threat from ISIS against U.S. persons and interests probably will remain greatest in regions where the group has an operational presence,” said the assessment. “ISIS’s ideology and propaganda, however, almost certainly will continue to inspire attacks in the West, including in the United States.”

“In Afghanistan,” said the assessment, “ISIS-Khorasan is attempting to exploit an influx of funds and personnel from prison breaks to undermine the Taliban and build an external attack capability if it can withstand Taliban pressure.”

This week, McKenzie testified before the Senate Armed Services Committee.

“ISIS and AQ [al-Qaeda] are seeking to exploit a reduction of U.S. CT [counterterrorism] efforts in Afghanistan to reinvigorate their adherents and increase their ability to plot and direct external attacks,” McKenzie said in written testimony.

“The Department of Defense assesses ISIS-K could establish an external-attack capability against the United States and our allies in [12 to 18] months, but possibly sooner if the group experiences unanticipated gains in Afghanistan,” he said.

“AQ likely still aspires to recruit and train, and if successful, restore an external-attack capability against the United States and our allies in [12 to 24] months,” he told the committee.

“For the United States, conducting CT operations in Afghanistan from ‘over the horizon’ remains difficult, but not impossible,” McKenzie said in his written testimony.

“The loss of collection following the withdrawal of U.S. forces has exacerbated gaps in our intelligence,” he said, adding:

This limits the intelligence community’s ability to provide indications and warning of VEO [violent extremist organization] threats from Afghanistan. Also limited is the United States’ ability to fix and finish those threats we are able to find.

The resultant reductions in consistent CT pressure potentially could enable VEO groups to pose increased threats to the United States and our allies, assuming the Taliban is unwilling or unable to do so itself.

“Senator,” McKenzie responded, “we have conducted no strikes in Afghanistan.”

“I will tell you we have not undertaken any strikes in Afghanistan since the first of September,” McKenzie said later in the hearing.

We continue to watch carefully as ISIS grows. They have gone through the winter. They have been able to carry out some high-profile attacks.

They still aspire to attack the United States and our partners abroad.

But do not worry. Biden will stop them from “over the horizon.”