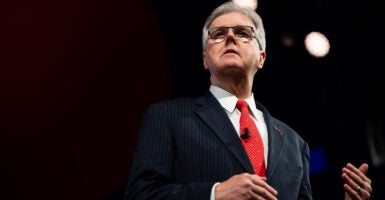 Texas Lt. Gov. Dan Patrick—seen here addressing the Conservative Political Action Conference on July 9 in Dallas—has suggested that it might be time to end tenure for the state's college professors as a way to combat lockstep leftist ideology on campus. (Photo: Brandon Bell/Getty Images)

Is it time for lawmakers to take a more active role in curtailing the radicalism now pervasive throughout higher education?

There are certainly signs that’s the case, and it should have happened long ago. A battle going on in Texas underscores the point.

Last year, Texas banned the teaching of critical race theory in K-12 public school classrooms. It was part of a larger, nationwide effort to keep racially essentialist ideas out of the official instruction in public schools.

The Faculty Council at the University of Texas at Austin recently passed a resolution, by a 41-5 vote, supporting the teaching of critical race theory in the name of “academic freedom.” The resolution said that “educators, not politicians, should make decisions about teaching and learning.”

So, a small band of academics and administrators have the right to foist whatever ideas and theories they favor on young people over the desires of the representatives of the people?

The resolution then said that the university stands with K-12 teachers who “seek to teach the truth in U.S. history and civics education.”

Note that critical race theory is being peddled here as simply “the truth.”

Texas Lt. Gov. Dan Patrick, a Republican, responded by proposing that the state should look at curtailing tenure for professors who insist on promoting critical race theory.

“The critical race theory people are trying to take us back to a divided country,” Patrick said at a press conference in February.

To these professors who voted 41 to 5, telling the taxpayers and the parents and the Legislature, and your own Board of Regents, to get out of their business, that we have no say in what you do in the classroom, you’ve opened the door for this issue because you went too far.

Actions such as stripping tenure from professors would certainly be an aggressive move with potential downsides. After all, tenure may be the only thing protecting the few right-leaning professors remaining in academia, such as Scott Yenor at Boise State in Idaho, who has the temerity to defend the nuclear family, among other things now considered verboten on college campuses.

Still, the university faculty’s resolution highlights the fact that school administrations are in many cases out of control and have often violated the public trust, despite the significant public investments they receive.

Dissenting University of Texas associate professor Richard Lowery assailed the pro-critical race theory resolution, calling it an inappropriate response from the school, which has deviated from the idea of free speech and has thrown in entirely with enforced advocacy.

“So many of the faculty view themselves as activists first, and educators and researchers maybe second or third, at best,” Lowery said in an interview with Fox News.

The school is “promoting the idea that academic freedom is the collective right of the faculty to decide which ideas are allowed on campus, not the individual right of faculty to express their own ideas,” he said, adding:

That is not what academic freedom means.

He said it’s ridiculous for the school to try to justify its support of critical race theory on the grounds of academic freedom when the school at the same time is creating a “diversity, equity, and inclusion” policy that applies a “political test” to new hires.

The professor then criticized the school for stepping into the state’s electoral politics.

“The Legislature trusted you to be the right people to judge the curriculum and to focus on education and keep politics out,” he said, noting:

They didn’t give you autonomy so you could turn our school into a social justice indoctrination camp.

Unfortunately, that’s what much of American higher education is becoming. The institutional focus is moving away from maintaining elite standards in education and toward reinforcing an aggressively left-wing ideological position.

It’s no surprise, then, to see other institutions in America conform to that same ethos. Like octopus tentacles, that dynamic is spreading out from college campuses into every other significant institution of society.

What the University of Texas faculty and the vast apparatus of higher education is promoting is not academic freedom. It’s the freedom of the academy to advance its ideological agenda without resistance or restraints.

The problem with critical race theory and the more expansive set of ideologies under the banner of diversity, equity, and inclusion goes beyond a single professor or university. The problem, as the left likes to say, is systemic.

The entire bureaucratic apparatuses of most college campuses are now constructed to reinforce the ideology of diversity, equity, and inclusion and social justice, as Lowery said.

Greene’s study reinforces the reality that diversity, equity, and inclusion has become the “central” concern of higher education in America. And this focus, reinforced by aggressive administration and faculty, pervades college campus culture.

The typical modern college campus is an environment that chills the freedom of thought and expression, where students “self-censor,” rather than debate the issues of the day.

That reality was underscored this week by Emma Camp, a student at the University of Virginia, who has taken a lot of flak in left-wing circles for publishing an essay March 7 in The New York Times about how universities stifle genuine free discussion.

She laid out how students are simply unwilling to discuss certain topics because they are afraid of repercussions, both socially and literally.

“I went to college to learn from my professors and peers. I welcomed an environment that champions intellectual diversity and rigorous disagreement,” Camp wrote. “Instead, my college experience has been defined by strict ideological conformity.”

Ironically, many academics and journalists on Twitter were angry the piece even got published, or they simply insulted the author—essentially proving her point.

Two aspects of the piece stood out: First, modern college campuses are clearly becoming places where free speech and independent thought go to die. Second, the dominant ethos that’s being reinforced is creating an environment where genuine “elite” education is missing or stultified.

Entire topics are set aside, like in the case of discussions about suttee—a traditional Indian practice in which Indian widows commit ritualistic suicide—because of racialized identity politics. And what is discussed is unserious, such as debates about whether “Captain Marvel” is a feminist movie.

With America’s highest achieving students, we are creating an elite in name only.

That professors—especially in the humanities departments—lean left isn’t new. What’s making higher education a stifling silo of culturally leftist conformity are school administrations that reinforce those ideas and make it very clear that the only diversity that’s desired is contained within the ideological confines of diversity, equity, and inclusion.

Given that higher education is the feeder to most of the top professions and institutions in America, from corporate America to the tech industry and from journalism to politics (among many other fields), it’s not hard to see how college campus culture is transforming our institutions so completely.

To reach the upper echelons of the American ruling elite, you must navigate a system that only accepts a narrow ideology as “truth” and punishes dissenters with threats of cancellation. The larger goal is to place this new ethos at the heart of American and Western society, to make it as pervasive and unquestioned as it is at most universities.

College campus radicalism didn’t moderate when it hit the real world. To the contrary, it’s now shaping that world. It’s using America’s most powerful institutions to bludgeon the rest of society into accepting this revolution.

If you don’t conform, you won’t be accepted in American elite circles. If you resist, you will find yourself ridiculed, ostracized, and censored by the institutions they control.

That’s the daunting challenge before the American people. It’s the people versus the institutions. The first step in changing that dynamic and our trajectory is acknowledging the true challenge before us.

We, the people, have the right to determine the course of our country. That right does not belong solely to a cloistered, out-of-touch clique of academics and administrators operating behind closed doors.