This College Professor Is Under Siege for Challenging Transgender Orthodoxy 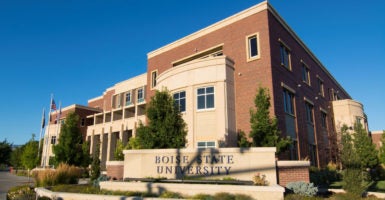 Scott Yenor, a tenured professor, has been under siege on campus after publishing articles with The Heritage Foundation and The Daily Signal about feminism and the transgender movement.

In those articles, Yenor explained the similarity in philosophy between the early feminists and modern transgender movement and how they aim at undermining traditional family values.

He wrote in a Daily Signal article on Aug. 2:

In response, students, activists, and even staff members at Boise State are now waging a relentless campaign to get Yenor fired or shut down.

A petition to have Yenor fired—which has now gained thousands of signatures—has been passed around on campus. Activists have posted flyers attacking him, and some have called for other faculty to come out and officially condemn him.

Despite these calls, Boise State has said it will not fire Yenor, according to The College Fix.

That doesn’t mean it’s easy sailing for Yenor, who continues to be lambasted and isolated.

In an interview with The Daily Signal, Yenor explained how the crusade against his work and others that challenge left-wing orthodoxy on campus is undercutting free speech at our colleges and universities.

The result of the reaction to his work, Yenor said, is that “there has been a very chilling effect on not only my speech, but those who would speak in defense of me both on the substance, and on the principle of academic freedom.”

The blowback came in earnest, according to Yenor, when the School of Public Service posted his article on its Facebook page. The dean received immediate negative reactions and anger from students and LGBT activists.

The dean, Corey Cook, then posted a statement on Facebook saying that while Yenor had a right to publish, his work violated the university’s aspirations of diversity and civility.

This didn’t stop the waves of attacks that would soon come upon Yenor.

The campaign against him became a “cause célèbre” for the new student diversity and inclusion hire, Francisco Salinas, according to Yenor.

In August, Salinas wrote an article condemning Yenor and tying his work to the recent events in Charlottesville and to Nazism.

And at an Aug. 29 faculty senate meeting, Boise State professor Lynn Lubamersky said that while she believes in free expression, she thinks that because of the opinions expressed in The Daily Signal article, Yenor “violated clear policies that govern our institution, our statement of shared values, and the State Board of Education policy regarding academic freedom and most important, our concern for our students.”

When someone expresses bigoted, homophobic, and misogynistic views as a representative of a university, I think that we do have the right and responsibility to at least make a statement that we do not share these values and they are not represented of our university.

Since Yenor published the Daily Signal article in August, he received a constant stream of criticism and calls for his work to be shut down.

“The position seems to be that anyone who would do research in areas that don’t affirm the contemporary views, should be shut down,” Yenor said.

Boise State student Ryan Orlando called for his school to “part ways” with Yenor in an article he penned for The Odyssey.

“There are a multitude of morally reprehensible notions in Yenor’s writing which constitute a dangerous ideology that warrants separation from the university,” Orlando wrote.

“In our belief, this is hate speech, and it’s alienating a lot of folks in this Boise State community,” said Joe Goode, a member of the Boise State Young Democrats, according to KTVB.

“We want to show that our university stands for more than hate, we are a community of equality and inclusivity.”

While he has received withering personal attacks over his research, Yenor said that few have engaged with the ideas or have seriously attempted to refute his arguments.

Yenor said the personal attacks don’t bother him, but he worries about the long-term impact on people worried that their views will not be argued with, but simply attacked on campus.

“That’s been one of the most disappointing things,” Yenor said. “Everyone in academia could live with having a debate about ideas, but a debate has to start with an understanding what the other person is arguing.”

“It strikes me that there has really been, first of all, no effort to first understand what I’m arguing, and second of all, to get anywhere beyond name-calling and labeling,” Yenor said.

Yenor said only a handful of students have come out to publicly defend him or even make the simple argument that he should be allowed to speak on his views without getting fired, though he has received a lot of private support.

Yenor said he’s made new friendships, especially among those who privately share his views or actually want to understand what he has to say.

Nevertheless, he said he now feels like an “alien” on campus.

“There’s a kind of feeling that there’s a mob,” Yenor said. “And you don’t run across a mob.”

What’s been worst about all the flak he’s received on campus, according to Yenor, is this larger impact on speech.

While Yenor said he will not back down about writing about gender and other areas that he studies, he is worried about what the attacks mean for free speech and others who are afraid to have their careers derailed.

“The problem with what is happening is that the idea that I’m in violation of the campus civility policies is intended to have a chilling effect on my speech and the speech of anyone who would agree with me,” Yenor said. “That is the bottom line with how I’m being injured.”

This, according to Yenor, will damage institutions of higher learning.

“What is primarily at stake in my case, I think, is the development of a culture of victimization on campus or a social justice framework for understanding education,” Yenor said in a follow-up email.

The article has been corrected to reflect that the quotes from the Aug. 29 faculty meeting were from Professor Lynn Lubamersky.