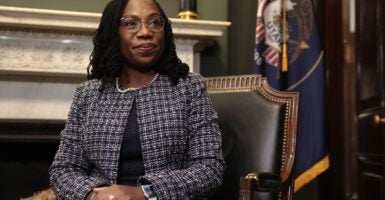 "Whoever he chose would be labeled forever as the best “black female” he could find, not the best candidate he could find for the job," reader Marcia Martin writes. Pictured: Supreme Court nominee Ketanji Brown Jackson visits Sen. Mike Lee, R-Utah, while making the rounds Wednesday at the Capitol. (Photo: Anna Moneymaker/Getty Images)

Editor’s note: The Daily Signal’s audience responded to our coverage of President Biden’s Supreme Court nominee and on Canadian truckers’ “Freedom Convoy,” among other topics. Enjoy this dip into the mailbag at letters@dailysignal.com.—Ken McIntyre

Dear Daily Signal: I think President Biden just made a third big mistake (“Biden Selects Jackson for Supreme Court From Left-Wing Donor ‘Shortlist’”). The first was stating he only would nominate a black woman to the Supreme Court. This excluded not only whites but other qualified nonwhites: Hispanics, Asians, Native Americans, and so on. Racist.

His second big mistake was choosing another nominee with an Ivy League background. If Judge Ketanji Brown Jackson is confirmed, that will be 8 out of 9 on the high court. Justice Amy Coney Barrett went to Notre Dame Law School, generally considered to be on the same level as the Ivies.

And Jackson may well be less dependably liberal than her backers believe. Consider that Chief Justice John Roberts was believed to be dependably conservative.—Pete Farris, St. Michaels, Md.

Dear Daily Signal: The saddest part about President Biden’s making an unconstitutional decision about the Supreme Court nominee (“What Senators Must Ask Supreme Court Nominee Ketanji Brown Jackson About Her Record, Judicial Philosophy”)? Whoever he chose would be labeled forever as the best “black female” he could find, not the best candidate he could find for the job.

There will always be an asterisk beside Judge Jackson’s name in the minds of thoughtful citizens, wondering if she was the best choice for the job.—Marcia Martin

Dear Daily Signal: I am in complete accord with Dr. Ben Carson’s assessment, in his interview with Virginia Allen, of President Biden’s selection of a Supreme Court justice (“Race Shouldn’t Be Sole Basis for Nominating a Supreme Court Justice, Ben Carson Says”).

I have worked and been friends with people of all races and colors. But I could not get hired at companies back in the 1970s because of affirmative action. Why? Because even though I had the qualifications, I was white.—Timothy Reams, Abilene, Texas

Dear Daily Signal: I’d like to compliment John G. Malcolm earnestly for his comprehensive review of the service of Justice Stephen Breyer, and second his thanks for Breyer’s service and his wishes for a well-deserved retirement (“What Justice Stephen Breyer Brought to the Supreme Court”).

While I will admit to being an independent, conservative American with a strong lean toward an originalist interpretation of our Constitution by the Supreme Court, I believe it is most important for the court to remain non-partisan and dedicated to legal interpretation of the Constitution.

I further believe that it is important that the Supreme Court remain a strong third leg in the designed separation of powers. It is important to have a balance of conservative and liberal “thinkers,” with emphasis on dissent and debate, in an atmosphere of decorum and respect.  If our Supreme Court justices don’t respect each other, how can the citizenry respect their rulings, or for that matter, the rule of law?

The highest court in the land must, like science, seek truth, fairness, and principle in their consensus opinions, not allegiance to a political party.

Finally, I would admonish those who chose to leak rumors of Breyer’s retirement, park a panel truck with a suggestive message at the Supreme Court, and participate in attempting to push this dedicated gentleman out the door early. Whatever the reason, consider the air of disrespect, the ungratefulness, and the shame your actions reflect on yourself, the court, and our great country.—Phillip Lee White, Warm Springs, Ga.

Thank you for John Malcolm’s well-written article on Justice Stephen Breyer, and for educating me. I appreciated Malcolm’s closing remarks. As a pro-life, constitutionalist conservative, it’s hard to imagine what is in the minds of these liberal justices. I now have a better understanding.

Malcolm didn’t hint that Breyer is playing God, but this in fact is what his thinking amounts to. Our Constitution must be studied in grade school and high school. Young people need to understand the core of our beliefs and values that give us freedom.

I’m a retired RN who raised a big family, did homeschooling in the 1990s for conscience reasons, and have no background in law. Yes, there are conservatives in Southern California. I appreciate you folks who give us the truth. Well done.—Rosemary Sporleder, San Diego, Calif.

Dear Daily Signal: Mary Margaret Olohan’s article was the best assessment of the Jan. 6 Capitol riot that I’ve read so far (“‘Breadcrumbs Lead to Speaker’s Office,’ Rep. Jim Banks Warns as GOP Slams Capitol Police Leadership Over Capitol Riot”). By their actions as statesmen, Reps. Jim Banks, R-Ind., and Jim Jordan, R-Ohio, give hope to conservatives who are standing by watching this poignant event in our history unfold on the side of facts and truth.—Linda Neal

Thanks to Banks and Jordan for searching for the truth. It hurts my heart what the left is doing to our country: 3,000 more U.S. troops to the Poland-Ukraine border, 0 troops to the U.S. border.—Barbara Reda

Apart from a proper congressional investigation of the Jan. 6 riot after Republicans again take over the House majority, I would like to urge the GOP to fashion a bill to reform the FBI. The legislation should have teeth, so that any misconduct, however trivial, in the FBI’s performance of its duties must be prosecuted; those found guilty would forfeit their jobs and benefits and be barred from future employment in law enforcement.

Until we treat seriously the egregious violations of the Constitution and the Bill of Rights, everything else is just theater. We need action not just talk, whine, and complain.—Ananta Gopalan, Bluffton, S.C.

I believe we have overwhelming evidence of a Democrat cover-up of the Jan. 6 Capitol riot. Capitol Police and the National Guard had to know something was up; the entire nation knew days before, just by watching TV news.

Are we suggesting that House Speaker Nancy Pelosi does not watch TV? Or perhaps Pelosi has to cover up this event because exposure would lead to more criminal and embarrassing actions, like Biden and Pelosi money ties with China?

It should make America damn well mad. We as a country are on a ticking clock to take the steps required to save what is left.—Stephen Gore

Dear Daily Signal: It appears that we Canadians have reached the limit of our patience (“Workers of the World Unite, and the Left Hates It”) People pay attention and are learning that cloth masks are practically useless against a virus, vaccines aren’t very effective in preventing infection, and lockdowns are almost useless in preventing illness, according to an extensive Johns Hopkins study.

Health bureaucrats continue to be myopically focused on getting everyone vaccinated while ignoring therapeutics. The Wall Street Journal reported that although hospitalizations are down, deaths are up. Doctors treating COVID-19 patients are having a difficult time getting their hands on effective medications.

That’s in the U.S. Here in Canada, the idea of ordering therapeutics hasn’t even crossed the mind of our health care bureaucrats. None is available.

People are fed up with mandates, lockdowns, and policies that destroy businesses. It’s time to accept that this virus is going to be around awhile and get about ordering effective treatments for the vulnerable.—Dick Draper, Surrey, British Columbia, Canada

Sen. Rand Paul, R-Ky., is exactly correct in supporting a truckers’ protest in America, as he did in his interview with Mary Margaret Olohan (“Rand Paul Encourages Truckers to Come to America and ‘Clog Cities Up’”). I too support civil disobedience as conservatives do it.

We don’t burn, pillage, or kill people in the streets, as leftist Marxists do because they go unpunished. Marxist politicians like Nancy Pelosi and Hillary Clinton are just as guilty.

We demand that politicians obey our Constitution and the laws that are legally passed by Congress and our states.

Truckers are expected to carry the burden themselves (“Rand Paul Weighs In on COVID-19 Tyranny, Hypocrites, and Civil Disobedience”). Let’s have a national day of protests—people at state capitol buildings, cars and trucks in convoys honking, throngs of marchers on the streets—and let the government know the people, united, have more power than the few imposing rules.—Loretta Bedford

Well done, you brave truckers! Stay brave and never give in to the leftist bull.—Craig Lingel

Dear Daily Signal: As revealed in Douglas Blair’s podcast interview with movie critic Christian Toto, I agree that there needs to be an outspoken conservative element in Hollywood—and everywhere else, for that matter (“Lights! Camera! Leftism! How Hollywood Went Woke”).

What I don’t understand is why anyone would ever care about what an actor thinks. Where is the evidence that actors are worthy of being listened to? Are they smarter? More educated in all things political? Somehow imbued with wisdom? Magic?

The lights go up, and all eyes are on the person who pretends for a living (both on set and in real time) pontificating edicts on cultural conduct. Not facts. Opinions. And whatever would lead one to believe it’s sincere? Because they can play sincere on TV?

The same holds true for sports figures. I fail to understand why physical prowess equals a fine and thoughtful mind that deserves three minutes on the nightly news.

We need to not give these people coverage.  We need to turn our backs on their attempts to change fleeting popularity into conventional wisdom.

We have no chance of being heard above the cacophony of pretty idiots until the media stops enabling this hijacking of our culture.—Tara Hulsey, Brazil, Ind.