Without American Renewal, Putin’s Aggression Is Likely Precursor of Troubles Ahead 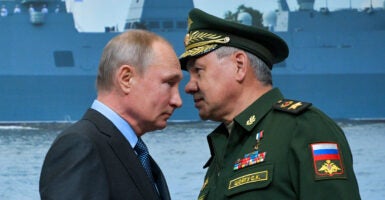 Many analysts think that Russian President Vladimir Putin—seen here conferring with Russian Defense Minister Sergei Shoigu at the Severnaya Verf shipyard on April 23, 2019—would not have invaded Ukraine if American influence was where it should be. (Photo: Alexei Druzhinin/Tass/Getty Images)

Since the end of World War II, the United States has been the world’s dominant force. Marked by relative peace and prosperity, it’s been an amazingly successful period for America and for the world.

Certainly, measured by world historical standards, the U.S. has little to apologize for and much to be proud of.

The first four decades of this period were defined by the Cold War. When the Soviet Union collapsed, the U.S. became the unchallenged power in the world.

As much as this was celebrated at the time, America’s actions since then have eroded this advantage. Having squandered a historic opportunity, Washington is now faced with a challenge unlike any other before it.

As Americans watch the horrible events in Ukraine unfold, we are left with a sense of loss. Nobody wants to send American troops to Ukraine, but there’s a deep sense that Russian President Vladimir Putin would not have considered such an action if American influence was where it should be.

Americans see the country growing weaker and new powers rising to challenge its supremacy. There’s no great answer to Putin’s aggression against Ukraine, besides hoping coordinated sanctions from countries around the world have an effect.

The Russian attack in Ukraine, as tragic as it is, could be a precursor to future challenges to Western order.

Those challenges will likely come from China, whose growth into a competing power ironically came with the assistance of corporate America. China is growing increasingly confident that it can displace America, especially in its own vital region.

China believes that America has become soft and lazy, fixated on relatively trivial matters. It may be right, but there’s still time to right the ship.

If China is allowed to dominate Asia, and maybe beyond, American children and grandchildren will pay the price. This is true on economic grounds and probably also from a national security perspective. To counter this, the trivial political battles of recent years will have to give way, and corporate America will have to decide whose side it’s on.

Despite the vital importance of this issue, it’s not even on the national political radar. If this isn’t fixed—and, to date, there’s less than zero momentum—the rest is likely hopeless.

The U.S. is no longer the unrivaled military power it was just years ago. U.S. military spending has dropped from 9% of gross domestic product in the 1960s to 3.5% of GDP today. All the while, China has been ramping up military spending at an alarming rate.

America’s huge advantage, especially in the area of high-tech weaponry, is not what it used to be or where it should be. China’s recent successful test of a hypersonic missile that circumnavigated the globe, something America has failed to achieve, drove home this point in a most unambiguous fashion. Chinese troop levels, both active duty and reserve, dwarf America’s.

The problem is not just spending, but mismanagement and waste. While American generals debate social policy or environmental issues, China is laser-focused on growing military power. With hundreds of billions per year in new spending and trillions in assets, military waste is so rampant that there is no reliable accounting of its depth.

The Pentagon has been forced to undergo an outside audit for years. It has never passed. By its own estimate, the Pentagon will not pass an audit until 2028 at the earliest. To counter a rising China and a more belligerent Russia, and to reassert America’s dominance in the world, all this needs to change.

More funding is needed, but funding alone will not do it.

America is sitting on vast energy reserves. Advances in renewable energy have been impressive in recent decades, but a desire to switch to new sources of energy before they are ready is eroding America’s strength in the world.

If Putin’s actions don’t prove this point, then nothing can. Similarly, America has lost nearly half its manufacturing jobs to China. This has been great for the bottom line of some American multinational companies, but it has harmed American communities and helped overturn American politics.

It’s also helped fuel the rise of America’s new chief competitor. America’s reliance on Chinese protective equipment at the onset of COVID-19 is just a taste of the vulnerabilities we have created. Free trade offers many efficiencies, but national security has got to become part of the equation.

Putin’s aggression has to serve as a wake-up call. America is not as powerful as it was just a decade or two ago. The challenge from Putin is nothing compared to the Chinese challenge at our doorstep. Without some form of American renewal, China is set to upend the long, peaceful, and successful period of American dominance in the world.

It’s time for Americans to decide whether we are going to let that happen.