How Big Tech Is Destroying What Makes Us Human 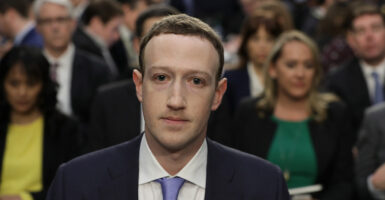 Big Tech companies don't just have a censorship problem, they are also altering how we think and interact with each other. Pictured: Facebook Chairman and CEO Mark Zuckerberg arrives to testify before a joint hearing of the Senate Judiciary and Commerce committees on Capitol Hill on April 10, 2018. (Photo: Chip Somodevilla/Getty Images)

Critics of Big Tech often rightfully criticize it for frequently censoring conservatives. But censorship isn’t the only problem stemming from Big Tech’s stranglehold on American society.

According to the Conservative Partnership Institute’s senior director of policy, Rachel Bovard, the technology we use is now fundamentally changing how we think and how we interact with each other.

In an interview with The Daily Signal, Bovard argued that “it’s akin to being the frog that’s boiling slowly.”

“We don’t quite realize that it’s happening. But our digital borders have been changing with relation to individual privacy, but also sort of how we interact with each other,” she explained.

Bovard also warned of private businesses collecting huge quantities of personal data, and how severe the consequences could be.

“We’ve opened up this boundary-less environment into what private companies collect on us, how they then share that with the government, how, as a consumer, we are being manipulated on a psychological level that we’ve really never experienced before,” she said. “And all of this third-party data collection, and what is done with it, is completely lawless space. There is no governing aspect to it. And I think that’s where our public policy is really trying to catch up.”

But it’s not just that the Big Tech companies have the data, it’s how they sell it to make their money. “That’s how Google makes 80% of its money, how Facebook makes the majority of its cash,” Bovard said. “Facebook is following you around the internet, collecting little bits about your shopping behavior, where you go, how long you’re on websites. They’re repackaging that in various ways and providing it to digital people who want to advertise to you.”

Bovard added: “They can make very accurate profiles about your age, your gender, what type of life you live, how rich you are. They can tell all these things from your data.”

In addition to privacy concerns, she discussed the impact that moving what used to be in-person gatherings into online spaces controlled by a company like Facebook could have for religious freedom.

Facebook should not be the arbiter of how people get together in this space, if you consider that many things about traditional religious beliefs Facebook could very easily classify as ‘hate speech.’

They have shown themselves to be firmly in one ideological category on this question, so why, as a community of faith, would you put your content in the hands of Facebook, where it can be cut off, and you can be deplatformed, and your community can be shattered if you’ve built it up around this digital space, at the whims of content moderators at Facebook.

Children today are exposed to far more technology than any previous generation. Bovard explained that there are consequences to the ubiquity of Big Tech here, too.

“If you consider just a small snapshot of the fact that Google, for instance, has been handing out Chromebooks to every school in America, for free, and this is not benevolence on the part of Google,” she said. “This is the fact that they want your child to be a client.”

Bovard added, “You have documents that came out of leaks from Facebook, showing that Facebook knows that its platforms like Instagram negatively harm children, that it promotes sort of psychological damage in teenage girls.”

She concluded that the best way to protect against the damage wrought by Big Tech is a combination of awareness and increased government protections against these companies.

“I think we have to start talking about the fact that this is something that is hurting our brain development. It’s changing who we are, and people who spend too much time on Twitter know this,” she explained. “You become a very angry person. So, we have to self-limit.”

Bovard concluded, “As much as we should want broad policy parameters around certain things, we also have to take responsibility for that. That’s always been the conservative way of doing things.”