Rubio: Ukrainians Remind Us ‘How Valuable Freedom and Liberty Are’ 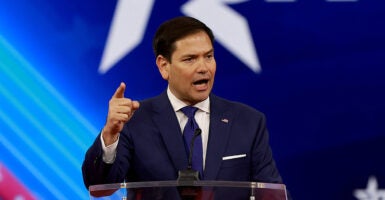 Sen. Marco Rubio says, “The pendulum is swinging,” as he offers hope that America will fight for its freedom. Pictured: Rubio speaks during the Conservative Political Action Conference on Feb. 25 in Orlando, Florida. (Photo: Joe Raedle/Getty Images)

Republican Sen. Marco Rubio delivered fiery marks on Friday, saying the people of Ukraine are inspiring in what they are prepared to sacrifice to be free.

“You have 70-something-year-old men, elderly women, younger children taking up arms, prepared to sacrifice everything,” the Florida senator said at the Conservative Political Action Conference in Orlando, Florida. “It reminds you how valuable freedom and liberty are.”

“These are people that are basically saying, ‘We refuse to be Putin slaves. We refuse to live under tyranny. And we’re prepared to give our life and die for it,’” added Rubio, who is a member of the Senate Foreign Relations Committee.

Rubio also made the case that the problems society faces today can be traced back to years of Marxist ideology seeping into American thought.

Rubio said he grew up with people who escaped tyrannical regimes but took some of their warnings for granted, only to see their fears become reality.

“I think in many ways, if you want to define what is so unique about this moment in our history, is that for the first time, perhaps in recent memory and certainly in recent history, Americans have come face to face with what it looks like when people use power to impose their will on society,” Rubio said.

In Rubio’s view, although Marxism is everywhere, many Americans don’t even realize they’re being influenced by it.

“Marxism is a lot more than an economic theory. Marxism is a viewpoint. It’s a philosophy, and at the core of that philosophy is that … there are a handful of people that know what is good and what is right, and they’re smarter and better than everybody else,” he said. “Marxists lie. And the reason why they lie is because if they told you who they were, you would never let them get where they want to get.”

One of the results of Marxism infiltrating America, Rubio argued, is the “speech code” and the “digital mobs” that try to ruin the lives of people whose speech they don’t like.

“It didn’t matter if you’re 13 years old when you said it—you’re one word, you’re one statement, you’re one retweet, you’re one ‘like’ away from destroying your life,” Rubio said.

Rubio said he has seen “fury and desperation” among people who fled to America for freedom, only to see the same tyrannical ideas take hold in this country.

In America, he said parents and business owners who are standing up for their families and livelihoods have given him hope.

“The pendulum is swinging,” Rubio said. “And I believe we are on the precipice, on the verge of a reinvigoration of the American spirit that will not just strengthen America … [but] will leave us freer and more prosperous than we have ever been.”