Ted Cruz Warns of Battle Between Power and Liberty 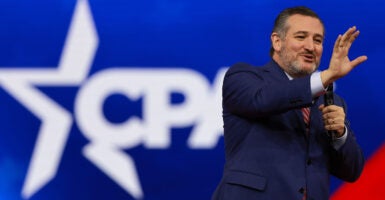 “Big is bad across the board,” Sen. Ted Cruz, R-Texas, says Thursday during his speech at the Conservative Political Action Conference in Orlando, Florida. (Photo: Joe Raedle/Getty Images)

Sen. Ted Cruz, R-Texas, said the key battle in the United States—and Canada—isn’t the strong against the weak but the powerful against liberty.

This, Cruz said, is why big government and big corporations are now allies.

“Big is bad across the board,” Cruz said during his speech Thursday on the opening day of the Conservative Political Action Conference in Orlando, Florida. “Big government sucks. Big business sucks. Big Tech, Big Hollywood, big universities—any accumulation of power that is centralized is fundamentally dangerous for individual liberty.”

The Texas Republican spoke about the “Freedom Convoy” of truckers in Canada in opposition to COVID-19 vaccine mandates. The Canadian government eventually took extreme measures to stop the protest, such as freezing truckers’ bank accounts.

When Cruz brought up the name of Canadian Prime Minister Justin Trudeau, a chorus of boos rang out from the CPAC crowd.

“Let’s pause for a second and acknowledge that this is the first time in recorded history that any Canadian has ever elicited that much of a response from any crowd on planet Earth,” Cruz said.

The senator continued to refer to “Justin Trudeau versus the God-fearing truckers,” which drew applause from the audience.

Cruz said the conflict of the powerful against liberty includes vaccine mandates, mask mandates, the effort to censor podcaster podcaster Joe Rogan, and the move by the Biden administration’s Justice Department to investigate parents who speak out at school board meetings.

“The Biden DOJ went after parents. Parents are many things, but they ain’t weak,” Cruz said, emphasizing that the clash is about power, not strength.

The senator also called for Big Tech to be “broken up into a million pieces” for offenses such as censoring the free speech of conservatives.

Cruz also said he is “bullish on bitcoin” because the currency doesn’t require centralized oversight by the government. But he noted that the Chinese government bans bitcoin and Sen. Elizabeth Warren, D-Mass., would like to ban it in the United States.

“The Chinese communists and Elizabeth Warren, they both want to control you,” Cruz said. “Your assets, your savings, your speech, your life, your children. Every decision they want to control. So we need to break up the means of controlling the citizenry. I want an unruly, uncontrollable, American ‘We the people.’”