This Religious Prosecution in Finland Could Be ‘Harbinger’ for Other Democracies 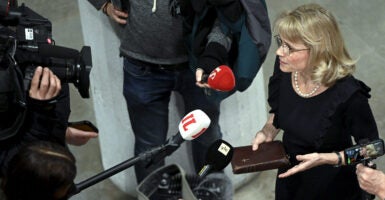 Päivi Räsänen, a member of Finland's Parliament, holds a Bible while speaking to reporters Jan. 24 before a session of her trial in Helsinki District Court. (Photo: Antti Aimo-Koivisto/Lehtikuva/AFP/Getty Images)

A court in Finland heard final arguments this week in the prosecution of a member of Parliament and a Lutheran bishop for expressing opposition to same-sex marriage.

Charged under Finland’s “ethnic agitation law” are Päivi Räsänen, a member of Parliament who also is a medical doctor and former interior minister, and Lutheran Bishop Juhana Pohjola. Each faces up to two years in prison if convicted.

Andrew Brunson, an American pastor who was imprisoned in Turkey for about two years, traveled to Finland on behalf of the Family Research Council, an educational  institute focused on traditional values, for closing arguments that wrapped up Tuesday.

Räsänen, 62, published a pamphlet in 2004 about the Bible’s teaching on marriage. In 2019, she was on a radio program and tweeted a picture of a Bible passage.

She is charged with three counts of violating Finland’s ethnic agitation law.

Authorities charged Pohjola with one count of violating the law in connection with hosting Räsänen’s pamphlet on his church’s website.

This type of prosecution could come to other Western democracies, including the United States, Rep. Chip Roy, R-Texas, said.

“The idea of Christians being persecuted in America just for living out our faith is not far away,” Roy told The Daily Signal in a written statement, adding:

In fact, we have already seen it happen here to Jack Phillips and Masterpiece Cakeshop out in Colorado, and a football coach in Washington state—Joseph Kennedy—being fired for praying after high school football games. Think about all the surveillance going on, about the persistent intrusions on our liberties.

Roy co-wrote an op-ed with Perkins for Fox News about the case, noting a prosecutor had said that “the Bible cannot overrule Finnish law.” The prosecutor also said that use of the word “sin” can be “harmful,” they wrote.

“In regards to the Finnish law at the center of this case, we face the possibility of having a similar problem with American law in the future, particularly if the Democrats succeed in passing the Equality Act,” Roy told The Daily Signal. “That’s why Republicans cannot be focused only on taking back the House or the White House; we have to fight to take back America. Our freedom depends on it.”

Early in the case, the prosecutor’s office said that Räsänen’s statements “violate the equality and dignity of homosexuals, so they transcend the boundaries of freedom of speech and religion.”

In her defense, Räsänen said:

Ultimately, the three charges brought against me have to do with whether it is allowed in Finland to express your conviction that is based on the traditional teaching of the Bible and Christian churches. I do not see I would have in any way defamed homosexuals whose human dignity and human rights I have constantly said to respect and defend.

Perkins said the Finnish prosecution could be a “harbinger” of similar laws in Western democracies.

“This could be a warning for what is coming even in liberal democracies if they have lost their way on religious freedom and Christianity,” Perkins told The Daily Signal in a phone interview.

That bill stalled in the Senate, where Democrats and Republicans each control 50 seats. If passed, the bill would add sexual orientation and gender identity as characteristics protected by the 1964 Civil Rights Act.

Critics assert that the bill would adversely affect parents, adoption agencies, religious organizations and schools, and girls and women’s sports.

“This is coming to America if we go down that path,” Perkins said, warning of a situation where “citizens just can’t express or act on [biblical] beliefs.”

“Finland says it’s fine to have beliefs in the Bible … as long as those beliefs stay between your ears. That’s not religious freedom,” he said. “Western civilization is a byproduct of a Judeo-Christian worldview.”