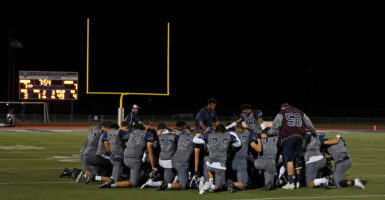 Attorneys for Joe Kennedy, the Washington state high school football coach fired in 2016 for praying briefly with members of his team after games, have petitioned the Supreme Court to hear his case and to reverse a lower court decision.

Previously, the U.S. Court of Appeals for the 9th Circuit found it was lawful for the Bremerton School District to fire Kennedy, arguing that since he was a government employee, his speech—including his prayers—violated the First Amendment’s prohibition on the government’s sponsorship or “establishment” of religion.

In their writ of certiorari, Kennedy’s attorneys asked the Supreme Court on Sept. 14 to resolve two important questions: First, whether a public school employee who prays on school grounds is engaging in government speech “that lacks any First Amendment protection,” and second, whether the establishment clause would compel a government employer to prohibit such speech, assuming it was private and “protected by the Free Speech and Free Exercise Clauses.”

Paul Clement, a former U.S. solicitor general and a partner with the law firm Kirkland & Ellis LLP, and First Liberty, a nonprofit that specializes in First Amendment law, representing Kennedy, wrote in his petition that the 9th Circuit’s ruling “converts practically everything public school teachers do or say during school hours or after-hours functions into government speech that the school may prohibit, thereby ensuring that teachers in the Ninth Circuit really do shed their constitutional rights to freedom of speech and expression at the schoolhouse gate.”

The case has been percolating through the court system since 2015. The Supreme Court declined to review the case in January 2019 due to what Justice Samuel Alito called “unresolved factual questions.”

Alito’s comments are mentioned in the 9th Circuit’s ruling:

Justice Alito believed that the Court was unable to review our decision until the record was clear about “the basis for the school’s action” against Kennedy. …

But after the case was remanded to the district court and discovery was completed, the district court ruled that “the risk of constitutional liability associated with Kennedy’s religious conduct was the ‘sole reason’ the District ultimately suspended him.”

Four justices—Alito, Clarence Thomas, Neil Gorsuch, and Brett Kavanaugh—issued a statement suggesting that the high court would be open to hearing the case when more facts are available. (The petition to hear the case was brought before the court prior to Justice Amy Coney Barrett’s nomination to the bench.)

“The Ninth Circuit’s understanding of the free speech rights of public school teachers is troubling and may justify review in the future,” they wrote.

The Daily Signal interviewed Kennedy in 2016. He spoke about his decision to offer brief inspiring speeches, followed by a prayer, after the games. Over time, the entire team and often the opposing team would join him—but he maintained it was always voluntary, and his prayers were not overtly religious.

“Nothing is ever required. It’s what they want to do. My belief is my belief. I’m not trying to push it on anybody. Faith is a personal thing for everyone. It’s just me giving thanks,” Kennedy told The Daily Signal.

Even then, the issue had taken a toll on him. “I spent 20 years in the military. This is definitely, by far, the hardest thing I’ve ever been through. I really had to just watch the game like everyone else,” Kennedy said of being forced to stop coaching.

Kennedy’s case is similar to another free speech and free exercise of religion case The Daily Signal has covered, Meriwether v. Hartop, et al.—although the 6th Circuit ruled in professor Nicholas Meriwether’s favor, shedding some light on just how egregious the 9th Circuit’s ruling appears to be to First Amendment advocates.

Meriwether’s employer, Shawnee State University in Ohio, had punished him because he refused to abide by the university’s protocols and address a student by his “preferred” pronouns. In March, the 6th Circuit ruled that the school “punished a professor for his speech on a hotly contested issue. And it did so despite the constitutional protections afforded by the First Amendment.”

Courts have consistently upheld the Supreme Court’s principle outlined in Tinker v. Des Moines; namely, that public school employees do not relinquish their First Amendment rights by virtue of their government employment.

Kennedy’s brief inspirational prayers on a football field are clearly not an example of him or the school “establishing” religion, nor would it look like the Bremerton School District promotes religion via its employees if it had allowed him to continue the practice.