School Security Guards Block Mom From Board Meeting: ‘They Didn’t Want to Hear Our Voice’ 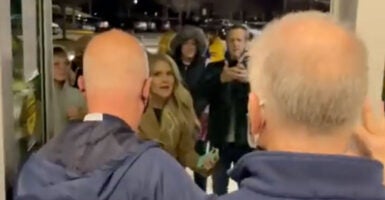 A mom of four children in Prince William County, Virginia, says security guards blocked parents from entering Wednesday’s school board meeting and physically removed another mother from even entering the building.

Merianne Jensen, whose Feb. 2 speech to the school board against mask mandates went viral, arrived an hour early to attend Wednesday’s meeting. But she and other parents were blocked from entering the meeting room and instructed to sit in a foyer.

“They didn’t want to hear our voice,” Jensen told The Daily Signal after leaving the meeting Wednesday night.

It was there that Jensen saw another mother being forcibly removed by school security guards. She posted the video on Twitter, where it received tens of thousands of views.

“To lay your hands on a woman like that is not OK,” Jensen said. “It’s unacceptable.”

>>> ‘You Are on the Losing Side of History’: Meet Mom Fighting Schools’ Mask Mandates

Jensen’s son had requested a speaking slot for Wednesday’s meeting, but he was denied the opportunity to express his own feelings about the school district’s mask mandate.

Jensen arrived for Wednesday’s school board at 6 p.m.—an hour before the meeting started—only to discover the meeting room was already full. She waited in the foyer with other parents. When a parent attempted to open the door to allow another parent to enter the building, the security guards stepped in.

She described the scene to The Daily Signal: “The security guard said, ‘You can’t come in, you can’t come in.’ [The parent] said, ‘Why? I’m here for the board meeting.’ They didn’t give her a reason. They just said she couldn’t come in and he pushed her out.”

Jensen provided photos of the foyer to The Daily Signal. She estimated that far more parents could have fit in the space Wednesday night. When she questioned the security guards, they told her to address her complaints to the school board.

“There was so much space in the atrium, they could have fit hundreds of people. It was pretty bare. They didn’t want to hear our voice,” Jensen said.

This is a developing story. The Daily Signal will continue to update.