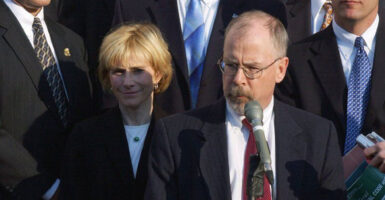 No one can ever claim that the notion of Trump-Russia collusion and the Mueller investigation were downplayed or ignored by the press. It was the opposite. The story was enormous and incessant.

Rich Noyes of the Media Research Center found that from Jan. 20, 2017, through July 20, 2019, the evening newscasts at ABC, CBS, and NBC alone devoted an astounding 2,634 minutes to the Trump-Russia narrative.

On Feb. 12, the conservative media reported a “bombshell.” Well, the term “bombshell” is almost copyrighted as a journalism term for “Republican scandal deepener.”

Special counsel John Durham, tasked with investigating the origins of the FBI’s probe into Donald Trump and Russia, reported a client for Hillary Clinton’s law firm, Perkins Coie, was monitoring internet traffic at Trump Tower, Trump’s Central Park West apartment building, and the Executive Office of the President. They wanted information to sell a “narrative” of Trump-Russia collusion.

ABC, CBS, and NBC coverage? None. Other networks and major newspapers balked. Then they tiptoed in to deny it meant anything.

From the beginning, liberal partisans like Rep. Adam Schiff have trashed Durham’s probe as “tainted” by Trump’s desires for an investigation. On ABC in 2019, Schiff denounced it as automatically “illegitimate” because “when you win an election, you don’t seek to just prosecute the losing side, but this is what Bill Barr is seeking to do.”

Schiff spent four years prosecuting the winning side of the 2016 election. Saying a probe is “tainted” by partisan desire displays an incredible lack of introspection.

While the networks spent more than 2,600-plus minutes on the Trump-Russia narrative, they’ve done next to nothing on Durham. Let’s review just how much coverage Durham has received from the Big Three networks since Attorney General William Barr put him on the case in the spring of 2019.

Many of these were brief mentions. On ABC, they came from Republican panelists on the Sunday show “This Week.” On CBS, two came in questions as Trump-hating FBI employee Peter Strzok sold his liberal-hack book on two CBS morning shows. (Has Durham contacted you? No.) On NBC, there was one question to Barr and one mention in 2021 that in his confirmation process, Attorney General Merrick Garland saw no reason to dismiss Durham.

Durham is the anti-Mueller. Nothing he finds is considered newsworthy. The media treats him as “tainted,” like he’s a news leper. “Unclean! Unclean!” Durham’s team isn’t loaded with liberal Democrats who leak juicy details to other liberal Democrats in “objective” media.

The media used the Mueller probe to constantly paint a black cloud over Trump’s presidency and present it in real time as perpetually doomed—even when it wasn’t. The walls were always “closing in” because that was the song they couldn’t stop singing.

To the media elite, Durham’s probe is only useful to the “right-wing media wormhole.” Facts don’t come first. The truth isn’t more important than ever.

So, just imagine we turned the Justice Department dockets around. Can you imagine what the “news” would sound like if we took all the enormous and incessant coverage of the DOJ prosecutions and House Speaker Nancy Pelosi investigations of the Jan. 6 riot and awarded that to the Durham probe? And turned the Jan. 6 probes into obscurity?

The facts on media coverage (and noncoverage) demonstrate how our media elite today is a Democratic machine. That’s why most Americans don’t trust the “news.” Like Clinton’s shady lawyers, they are all about creating a partisan narrative, not reporting events “without fear or favor” as they unfold.