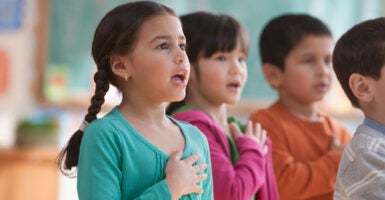 Optimally, what a good civics education will teach children includes what are the ideals of liberty we fight for, how they were established, and how difficult it was to do it, as well as the nuts and bolts of the government and civil society we have now. (Photo: Jose Luis Pelaez, Inc./DigitalVision/Getty Images)

Any parent with school-age kids knows they’re probably not getting the civics education they need. Teachers lack proper training or are increasingly pressured to embrace “action civics.”

A new study from the Pioneer Institute and the National Association of Scholars, provided exclusively to The Daily Signal, offers a detailed ranking of 15 civics education programs offered for K-12 instruction.

David Randall, director of research at the National Association of Scholars, evaluated resources like the 1776 Curriculum from Hillsdale College to the Pulitzer Center’s 1619 Project Curriculum. He says:

In 2021, the American people awoke to the longstanding crisis in K–12 civics education. Not the old crisis of plummeting test scores and abysmal knowledge of our republic’s structure and our nation’s history, but the new crisis—that radical advocates have seized control of our K–12 public education system and have imposed a curriculum that forwards their dogmas in the guise of civics and history.

In his report, “Learning for Self-Government: A K–12 Civics Report Card,” Randall grades the civics education resources on a scale of A through F. (See chart below.)

Randell spoke to The Daily Signal about his research, offering his recommendations for educators and advice for parents. A lightly edited transcript of our conversation is below.

Rob Bluey: Why is America facing a crisis in civics education today?

David Randall: We have had 50 or 60 years of progressive education, which first removed all the traditional civics education, and then, because nobody knew any civics anymore, they then said it needed a new solution, which is this unfortunate, politicized action civics—civic engagement service learning, which substitutes radical progressive pedagogy as a vocational training for activism, for real civics.

Bluey: What is civics education? And can you explain why it’s important for students to learn these lessons?

Randall: Civics education is, “How does our republic work?” That’s, most narrowly, the Constitution, the Bill of Rights. How do you work in a mayor’s office? What does your local representative do? It’s also the history of our country and of the ideals of liberty.

We need to know what are the ideals of liberty we fight for, and how they were established, and how difficult it was to do it, as well as knowing the nuts and bolts of what you have now.

Now, you ask why do our children need to know it? Because we can only maintain a free republic if our children are educated to be citizens. I believe it’s Ronald Reagan who said, “We’re only one generation away from extinction.” That one generation gets lost in the schools.

Bluey: Your study, “Learning for Self-Government: A K-12 Civics Report Card,” evaluates 15 civics programs and grades them on their effectiveness. Who comes out on top?

Randall: The 1776 Curriculum by Hillsdale College is absolutely excellent. It’s both challenging and it gives everything that you would need, not just for high school, but frankly, it would be a good first-year college course. There’s really nothing else like that.

I would say for the best textbook overall, “We the People.” It’s nuts and bolts, but it’s providing nuts and bolts stuff that I don’t think Hillsdale yet provides, partly because Hillsdale, I think, doesn’t want to do a textbook.

I would say, you always need to have helpful government to support the standards. The new K-12 Civics and Government Standards out of Florida are really good. They will support good civics education throughout Florida schools.

Bluey: What civics programs do teachers and parents need to be worried about the most?

Randall: This is everything that does action civics. And that’s because, it’s really not doing civics education, it’s doing political activism. And we just chose a sampling of them.

But for example, the Jonathan M. Tisch College of Civic Life, it’s a university program that is training people, undergraduates, to do this sort of political activism and calling it civics education, including people who are both working directly in the schools and being trained to work as teachers.

At the broader political level, Educating for American Democracy is this broad framework initiative, which is trying to get every state civics education standard aligned for action civics and abbreviating as much as possible traditional civics education.

I will then say there is stuff which is more providing lesson plans, more softly, softly doing the progressive activism. Something like iCivics. More hard-edged is Generation Citizen and then the 1619 Project curriculum, both of which are extremely radical in the sort of activism they are promoting.

Bluey: The 1619 Project was a well-publicized New York Times Magazine article. But along with that, there was a curriculum. How is that being implemented in schools? Are school districts adopting it wholesale or is it individual teachers who may be picking and choosing some of these curricula on their own?

Randall: Both. A number of school districts signed up immediately to say, “We will do the 1619 Project curriculum.” Frankly, I think they may have signed up without necessarily having fleshed it out. What the curriculum is is crowdsourced lesson plans. Somebody, some local teacher comes up with a plan. It’s then put up onto the webpage and then everybody can use it.

This is actually standard for teachers now. There’s an enormous market for crowdsourced lesson plans, where, by the way, there is actually, I gather, a political bar, a screening so that it’s easy to get far-left lesson plans and much more difficult to get crowdsourced conservative ones.

But this is standard for our country, which tries to have local flexibility and initiative. So, teachers get to do stuff on their own. The 1619 Project curriculum is trying to fit that model.

Bluey: As you developed the criteria for your study, how did you decide which of these civics programs worked well and which didn’t?

Moderately good programs sometimes cooperate a bit with action civics and civic engagement, and could do better, and I must say are also not necessarily as rigorous. The best programs are rigorous traditional education, intelligently conceived.

And by the way, I don’t know if this is on your visual thing—one of the things that’s very important is teacher training. If you can maybe shoot me a question about that?

Bluey: Why is it so important to focus on teacher training when it comes to civics education?

Randall: Because our teachers don’t know civics themselves either, and what you teach the teachers is what the teachers will teach the students. And therefore, the excellent program is teaching American history out of the Ashbrook Center. There is, however, also good work being done by the Jack Miller Center and to a certain extent, the Gilder Lehrman Institute of American History.

But the point is that these are programs which are already thinking about how to train the teachers, and particularly the Jack Miller Center, how to adjust what they’re teaching to each state’s individual requirements for teacher licensure.

Bluey: Is this a problem primarily in public schools or do private school parents need to be worried about this as well?

There is also the fact that the accreditation of the National Association of Independent Schools is also being affected by these social justice warriors. And they are also putting in very radical diversity requirements as we speak. There is a very important need either to reclaim the private school accreditors or to found new ones that are free of the politicization that is sweeping the nation.

Bluey: I’m just curious, how did such radical forces get control over our education system to begin with?

Randall: Partly, they cared and showed up. The radicals did the long march through the education schools, and they have just been teaching more and more radical stuff, quietly excluding more and more conservative, moderate, and liberal voices, until you get to the point where they don’t even realize the latest generation, that what they’re getting is several generations of increasingly radical turns on the curriculum.

So, there’s partly the true believers and partly, in the younger generation, teachers who don’t even know that it’s supposed to be different.

Bluey: You write in the study that Americans woke up in 2021 to this crisis in civics education. Are you hopeful that we can once again return to a truthful and accurate teaching of civics in America?

Randall: My hope lies in the American people, and I must say, I mean, active, action civics is this horrible euphemism for political radicalization.

So, my hope lies in the American people acting as citizens, and engaged in … to take part in these long, but necessary political campaigns to retake the schools.

Bluey: What advice do you have for parents like me, for example, who have read your study and want to do something about it in our own kids’ schools?

Randall: A lot of what my study is saying is that there’s a lot of existing resources, and we should coordinate them. We don’t need necessarily to write a new textbook. We don’t need to necessarily write new lesson plans. We need to link them together, and link them with teacher training, and get the best return on investment for civics reform, like building on this network of good existing resources.

But the point is, be active.

Bluey: How can our listeners learn more about your work and the National Association of Scholars?

Randall: The National Association of Scholars website is nas.org. I’m also policy director for the Civics Alliance, which has been convened by the National Association of Scholars. And that is civicsalliance.org, where you will find model civics legislation, resources for grassroots activists, curriculum resources. Everything that’s needed for parents, for policymakers, or grassroots activists.

Bluey: Thanks so much for your work on this issue. Again, the study is called “Learning for Self-Government: A K-12 Civics Report Card.” Thanks for joining us, David. We appreciate it.

Randall: Thank you so much.