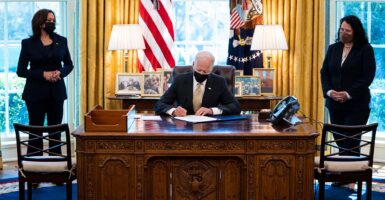 Up to 226 forgivable loans totaling more than $36 million were given to labor unions and related organizations that weren’t eligible to receive the loans, according to a new report by the Freedom Foundation, a free market conservative think tank.

The loans were administered by the Small Business Administration through the Paycheck Protection Program, which was created by Congress in March 2020 to help businesses retain their employees during the COVID-19  pandemic.

Although the program was later expanded to include labor unions and related groups when President Joe Biden signed the American Rescue Plan into law last year on March 11, at its onset, unions were not eligible for the loans.

The Freedom Foundation report, “Profiting From a Pandemic: How Ineligible Unions Collected Millions in Federal Covid Relief Funds,” says the union fraud “diverted resources away from the purpose of the PPP”; namely, helping small businesses.

“While a variety of business enterprises with fewer than 500 employees qualified for the forgivable loans, nonprofit eligibility was primarily limited to tax-exempt organizations operating under 26 U.S.C. § 501(c)(3), which covers most traditional charitable nonprofits,” the report states. “As labor unions are generally registered with the Internal Revenue Service (IRS) under 26 U.S.C. § 501(c)(5), most were not initially eligible for PPP loans.”

Because unions’ revenues mostly derive from members’ dues, the report contends direct support to unions was unnecessary: “[T]o the extent the PPP loans to businesses allowed union employees to keep working, it also allowed unions to continue collecting dues from their paychecks.”

A dozen teachers unions and teacher advocacy groups appeared to have received the bulk of the loans in question. The Michigan Education Association received the largest loan, totaling more than $6.4 million.

“Not only were the unions ineligible for these funds, but they had little need for them,” according to the report. “The federal government allocated nearly $200 billion to public schools to help them weather the pandemic and keep staff on payroll—and paying union dues.”

Many teacher unions have pushed for school closures, lockdowns, and remote learning since the onset of the COVID-19 pandemic.

Robin Rayfield, executive director of the Ohio Retired Teachers Association, confirmed the organization received the loan, but said he was unaware of any ineligibility for it.

“We applied, and they gave it to us, and we were happy for it,” Rayfield said.

The unions received millions in forgivable loans “despite the fact that state and local governments did not experience the kinds of economic disruption felt by private businesses and received hundreds of billions of dollars in direct federal aid used to keep staff employed,” the report says.

SBA Administrator Jovita Carranza said if the loan-review process showed a recipient was ineligible to receive a loan, it would not be forgiven. According to the report, however, “What action, if any, the SBA took is unknown, and at least $24.2 million of the $36.7 million in union-related loans identified by the Freedom Foundation have now been forgiven.”

The authors of the report called on the Small Business Administration and the Department of Justice to investigate further and prosecute those who fraudulently received the taxpayer funds.

“Disconcertingly, the apparently inappropriate PPP loans may have been granted due to fraudulent loan applications or other questionable conduct by applicants or the private lenders operating under the SBA’s delegated authority to approve loan applications,” according to the report. “As the entity charged by Congress with implementing and overseeing the distribution of PPP loans, the SBA certainly bore responsibility for instituting internal controls necessary to ensure ineligible organizations did not receive loans.”

The Small Business Administration couldn’t be reached for comment, and with the exception of the Ohio Retired Teachers Association, none of the other unions, advocacy groups, or related organizations cited returned calls or emails seeking comment.